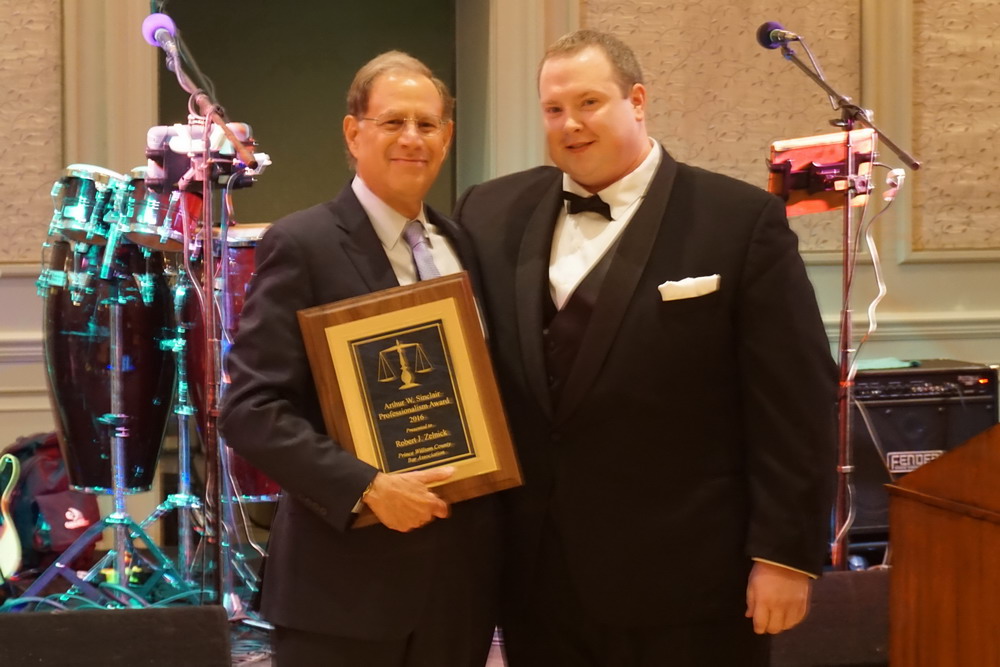 The PWC Bar Association recently honored the best attorneys in the local legal profession for their leadership, trial advocacy, pro bono/volunteer work, and professionalism during its annual Bench-Bar Dinner Dance.

Bradley Marshall, Esq., current President of the PWC Bar Association, presented Jeani Wiethop, Esq., with the past president’s award, specifically recognizing her leadership during the celebration of the local bar association’s 75th Anniversary, and by encouraging greater pro bono service by association members.  Bradley stated that “Jeani’s tenure as President was one of the most successful in recent memory,” and that her presidency laid the foundation for many of our current initiatives.

Trial Attorney of the Year Awards are given by the local bar association to recognize attorneys for exemplary service in the courts, based on nominations from the bench.  An honoree is recognized from each level of court.  When Chief Judge Carroll A. Weimer, Jr., from PWC Circuit Court presented Peter Francescon, Esq., with Boyce, Leahy & Francescon Lawyers, with the award for that court, Judge Weimer mused that, “It was not a unanimous decision because I had to recuse myself, since we used to work together [laughter].”  Judge Weimer later commented that Francescon was nominated to receive the award because of his “dedication to hard work, whether he was hired to represent his clients, or appointed by the court.  He is always well prepared and ready for trial.”

Erin Ford with The Ford Law Firm, PLLC received the award for General District Court, and Meghan Matulka, with the Law Office of Meghan A. Matulka, received the award for Juvenile and Domestic Relations District Court.  The J&DR District Court also nominates a Guardian ad Litem of the year.  This year, the award was presented to Jessica Stokes-Johnson, with Stokes-Johnson Law, PLLC.  Chief Judge Lisa M. Baird of PWC J&DR District Court commented that, “Both of our recipients this year go above and beyond in their client representations.  They each handle challenging cases with professionalism while representing their client’s interests.”

The Pro bono/Volunteer Attorney of the Year Award was presented by Anna Bristle, Esq., with Bristle Yi Law, PC, to Assistant Commonwealth’s Attorney Bradley Marshall, Esq., for his tireless efforts associated with so many outreach programs sponsored by the local bar association, including organizing breakfasts at SERVE, mentoring youth through the Beat the Odds Program, teaching high school seniors through the So You’re 18 program, and more.

The Arthur W. Sinclair Professionalism Award, named for the late Judge and founding member of the PWC Bar Association, is considered a lifetime achievement award.  This year, it was presented to Robert J. Zelnick, Esq., with Zelnick & Associates, PC.  Paul F. Nichols, Esq., with Nichols Zauzig Sandler, PC, had the honor of presenting the award and  commented, that, “Bob (Robert) has practiced these many years following what he observed from Judge Sinclair; he is always respectful of  the attorneys and parties in a case; well versed in his subject matter; and always the consummate professional.”

The Prince William Chapter of the Virginia Women’s Attorneys Association also presented its annual Justitia Award at the PWC Bar Dinner Dance.  This year, Alexandra Ribe, Esq., President of the PWC VWAA, presented the award to Amy Ashworth, Esq., a former Assistant Commonwealth’s Attorney, for her “long career prosecuting domestic violence crimes, helping witnesses and victims understand that abuse was not their fault.”

The PWC Bar is proud to recognize these local attorneys for exemplifying the best in the legal profession.