Named after a former longtime Service Authority board member, the Durward E. Grubbs Jr. Environmental Center features an interactive and informative educational wing focused on water and wastewater as well as the vital role the utility plays in the health of the Chesapeake Bay Watershed.

It’s so easy to take many commonplace necessities for granted. For example, it’s easy to forget about how wonderful it is to sleep every night in a warm bed, and to have electricity to light the darkness, and warm water to wash away the troubles of the day. The Prince William County Service Authority (PWCSA) is the reason that water comes out of the tap every time it’s turned on. This year, the Service Authority is celebrating their 35th anniversary, and the residents of Prince William are surely grateful for the workers who put time in to make sure their water stays clean and readily available.

Prior to the establishment of the PWCSA, access to water was a puzzling and complex process. Since the utility was only slightly regulated by the county, the process to acquire water service was both confusing and unreliable. More than a dozen different providers were competing to provide water to citizens, and they were not held to quality, service, or rate structure standards.

At the PWCSA’s 35th anniversary celebration on Jan. 11, there was a focus on appreciation for the past, while acknowledging the hard work being done by the people of the present. “We’re celebrating thirty- five years because they started it all,” said General Manager Dean Dickey. “But we get to stick around because of the work you do,” he later elaborated. 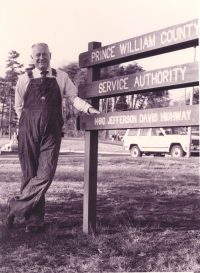 The Service Authority appointed Raymond L. Spittle as its first General Manager in 1984 before the current headquarters was constructed off Prince William Parkway.

Several birthday cakes marked the occasion as people in everything from working boots to pants suits celebrated thirty-five years of hard work and dedication. Smiles decked the faces of employees who had a welcome break from the important work done at the Service Authority.

When asked what they would like more people to know, many workers at the Service Authority told me about the many community and youth outreach programs that are being led by the PWCSA. Programs are offered for students from kindergarten to high school, and organizations such as HOAs and civic associations are encouraged to request a presentation from the service authority.

To aid in their outreach programs, Prince William opened the Grubbs Environmental Center: a six- thousand square foot laboratory space and exhibit that details the work that explains the science behind the work of the Service Authority. The Grubbs Center is open to the public, so any citizen can walk in and take a self-guided tour. Additionally, student and youth groups are encouraged to set up a guided tour through the PWCSA’s website.

This year, as the Prince William County Service Authority celebrates thirty-five years of serving the people of Prince William, citizens of the area might want to take a moment and reflect on the work that goes into getting your water from the Potomac River all the way to your bathroom every morning. We are all grateful!