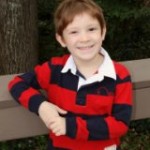 This young actor recently got his big Hollywood break playing Janeane Garofalo’s son in “Bad Parents,” a witty satirical comedy about sports parents behaving badly and a suburban mom who relives her season with the soccer-obsessed parents whose outrageous “win at all costs” behavior spirals out of control. “Bad Parents” debuted at several prestigious film festivals last fall.

How did you get into acting?

Since I was little I have made movies on the iPad and Daddy’s phone, and he gave me his old movie camera too. I’m making a monster movie with it now. I jump out in a mask and scare people.

What was the first job you ever did?

Job? Kids don’t have jobs, that’s silly. Mommy and Daddy have jobs. Bad Parents is my first movie that people can see at the movies.
What did you like most about making this film?

Janeane was very funny and she kept making me laugh. She is so silly. I got to play a lot and pretend that I had a sister too. Movies are a lot of fun.

Sometimes, you have to keep doing the same thing over and over. One time I made Janeane laugh when I said ‘You said that already’ and she said ‘I know, I know’ and she smiled and said I was funny.

Do you see yourself doing more acting work?

Yes. I would like to be in more movies and maybe TV too. Maybe a scary monster movie would be fun.

What do you think you would like to do next?

I am going to be a scientist, a professor and a writer. Science and math and nature are my favorite and I like making my own books. I have lots of science books and my own microscope too. I like doing experiments and making things.

Do you play any sports?

I used to play soccer but now I do swimming every weekend. I like to play baseball and basketball at home. I also love to climb trees and explore trails in the woods.

A.J. isn’t the only “star” in the family. When asked how AJ got the part, his father said, “The writer/director Caytha Jentis saw a photo of at my mother’s house in a pre-production meeting. My mother Dorothy Fucito is the producer. Caytha thought he looked perfect for the part, so she just asked if AJ would be interested.”

And the rest, was history. Best of luck to you AJ!

Prince William Living‘s movie reviewer Tom Basham, will be reviewing “Bad Parents” soon. Look for it under “What to watch”.