With the onset of technology and digital media, iPhones and Kindles, it may seem like brick-and- mortar libraries are heading toward obsolescence. Within the Prince William County Library

System, the Library Foundation works to counteract this belief. This non-proﬁt raises both money and awareness for the community and neighborhood libraries throughout the County and Cities of Manassas and Manassas Park.

To supplement the public funds received from the state and local jurisdictions, the 10 libraries within the system rely on the passion of volunteers, the Foundation and other donors to both expand services and contain costs. Volunteers help to save local taxpayers around $750,000 a year in operating costs. “Community support, fundraising, philanthropy, are a very important piece of sustaining our library system,” said Library Foundation president Bryanna Altman. She explained that guided by the eﬀorts of Prince  William Library System director Dick Murphy and marketing and development director Mary Tompkins, the library collectively raises

$1.7-3.2 million each year from a number of sources, including the Foundation. “That money allows us to have all of these fantastic programs that we have for the kids,” Altman said, such as computer access, language, storytelling and craft programs.

The Library Foundation is composed of a 15-member Board of Directors. The Board’s Executive Committee is comprised of Altman, vice president Bennett Whitlock , treasurer Earnie Porta and secretary Joyce Phillips.

“The Board works together as a team,” said Altman. “We’re all volunteers and benefactors and do whatever it takes to raise money to help supplement the needs of our public library system…Over the years the foundation has raised money by hosting community gatherings to include art auctions, book signings, galas, food and wine pairing dinners and a Distinguished Author and Speaker Luncheon Series. We will continue to do the same in 2013.” 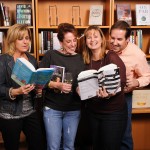 The Library Foundation is currently spearheading eﬀorts to fund an expansion and outdoor area patio at the Potomac Community Library in Woodbridge. The second oldest library in the system, it was built in 1974, serving residents for nearly four decades. “People in the community began going to that library, and they began to bring their kids to the library and now their kids–their grandchildren–are going to that library, so it was deﬁnitely time to make some improvements,” Altman said. A brick patio plaza where residents can relax and read on warm days, or use the library’s wi-ﬁ, will be constructed on a parcel of land behind the building. “We want to help it to be a gathering place,” she added. “We want to provide a sense of community there.”

To raise funds for this improvement, the Library Foundation has been selling imprinted bricks which will then be used in the construction of the patio. An additional $15,000 was also raised last October from the ‘Blue Jeans and Diamonds in the Stacks’ fundraiser held at the Chinn Park Regional Library. The event featured a silent auction, live band and “celebrity bartenders” such as Porta, who is also Mayor of the Town of Occoquan, and Prince William Supervisor Marty Nohe.

If all the fundraising eﬀorts go according to plan, the patio will be completed and ready for use in April 2013. Bricks can be purchased for a donation of $100-$250. Any excess proceeds will be used to make additional improvements to the Potomac Library and other community libraries. Altman said that in addition to the patio construction, the money will be used to replace windows running along the back of the building. To purchase a brick, go to www.pwgov.org and search keyword “Library Foundation.” After clicking the foundation link, you will see instructions for donating online.

The Library Foundation is also looking to raise funds to help with the creation of new community libraries in Montclair and Gainesville.  “We’ve seen a large increase of people moving into these areas, and we’re still seeing them traveling to other libraries,” Altman said.

“The exciting news is that we have the Montclair and Gainesville libraries moving forward,” Whitlock said. “That’s exciting because there haven’t been new libraries built in the county for many years.” Expected completion date for both is September 2015. The Montclair Community Library will be located by the intersection of Rt. 234 and Waterway Drive and the Gainesville Library at the intersection of Rt. 15 and Lightner Road.

While fundraising does make up a large portion of the Library Foundation’s mission, the group also strives to provide outreach in the community, showcasing the importance of local libraries. “We are the outreach arm of the library system; it’s our job to promote the library system,” Whitlock said. “With all of the technology and e-readers, people say ‘Who uses the library anymore?’ If people took the time, they’d ﬁnd that the libraries are always packed. They’re a huge asset to the community, as far as for research and job-hunting. They run absolutely wonderful programs.”

So the next time you’re looking for a good read or a good cause, check out a book or program at your local library, and also check out the Library Foundation and their work in Prince William.

Stephanie Tipple is a college student, journalist and community leader. She resides in Woodbridge. She can be reached by email at stipple@princewilliamliving.com.