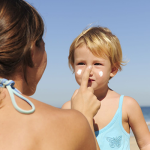 There are roughly 3.5 million new cases of skin cancer diagnosed annually in the United States. More people have had skin cancer than all other cancers combined, according to the American Cancer Society.

Prince William County Assistant Fire Chief Lance McClintock said the Prince William Department of Fire and Rescue is urging people to take precautions to guard against exposure to the sun. “Although skin cancer has been on the rise over the last few decades, there’s a lot that individuals can do to protect themselves and their families during the summer.”

Wearing sunscreen with an SPF, or sun protection factor, of 30 or greater is foremost among the things people can do to protect themselves against the sun’s harmful ultraviolet rays.

McClintock said people should be generous with the sunscreen. “Make sure that you’re reapplying sunscreen every two hours. If you’re in the water or perspiring, you need to apply it more frequently.”

People should also seek shade if they’re out during the hottest part of the day, McClintock said. “Stay out of the sun during peak hours which are really between 10 a.m. and 4 p.m. If you need to be out in the sun, try to cover up. Wear a wide-brimmed hat that can cover your ears, neck and face.”

Skin cancer varies in numbers and types. Of the seven most common cancers, melanoma is the least common, yet deadliest form of skin cancer. It is the only one that is increasing and kills one person every 57 minutes. In 2010, more than 60,000 people in the U.S. were diagnosed with melanoma of the skin. More than 9,000 died from melanoma, which is caused by exposure to the sun’s ultraviolet light along with the artificial ultraviolet light in tanning beds, according to the Centers for Disease Control and Prevention. Although ultraviolet rays are its strongest during the summer, exposure to ultraviolet rays can occur throughout the year.

People should also know that surfaces like water, cement, sand and snow reflect 85 to 90 percent of the sun’s ultraviolet rays.

McClintock said the department’s offers its sun safety suggestions, along with drowning prevention, grilling and fireworks safety to help keep people from harm during the summer “We’re just taking an overall look at summer safety and reminding folks, with the extended length of summer days, to be cognizant of the effects of the sun and to take appropriate precautions.”