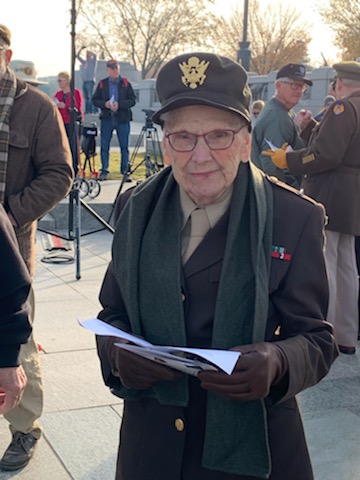 All eyes were on Elizabeth Lewis, 100, as she received her first dose of the COVID-19 vaccine at Novant Health UVA Health System’s recent clinic.

Protected by her mask that read “100 & Fabulous,” the grandmother of five and great-grandmother of four was relieved to do her part in getting the community back to normal.

“Many good things have come out this vaccine,” Lewis said.

As a World War II  nurse, Lewis saw her fair share of illness and division. But when asked about her service, Lewis recalls the team camaraderie.

“We all worked together,” she said. “Even in times when we were being bombed or stopped by a sub, we had the assurance we were going to be together no matter what. The men looked out for one another and even told me at times, ‘Take care of my buddy, don’t worry about me.’”

Lewis says this same mindset should be held when receiving the vaccine.

“It’s about protecting one another,” she said.

She felt it was her duty to take this step for her country to return to normal, similar to the sense of duty that compelled her to enlist after war was declared.

After only one year of training, Lewis was commissioned into the U.S. Army Nurse Corps in July 1943.

She endured extensive basic training at Fort Hampton, New York. Next, she was assigned to U.S. Army Hospital Ship Emily Weder to aid soldiers wounded in the invasion of southern France. Over the course of this deployment, she cared for more than 1,000 Allied servicemen and nearly 100 German prisoners of war.

Lewis was then re-deployed to care for ill and wounded soldiers in the South Pacific – victims of some of the worst medical conditions experienced in that war. Many suffered from serious illnesses, malaria and jungle fever, in addition to traumatic wounds.

In 2019, she placed the wreath in the Veterans Day ceremony at the World War II Memorial in Washington, D.C. Additionally, she was one of only a handful of women to earn a Quilt of Valor – a handmade quilt awarded to war veterans to represent healing and appreciation.

Lewis, a mother of four, says she didn’t have any issues adjusting to the pandemic restrictions, other than being away from her friends at her senior living facility. Her daughter Betty Masters has been with the radiology department at Novant Health UVA Health System Prince William Medical Center for almost 40 years. Masters was concerned for her mother getting sick but says she’s proud of how Lewis handled adhering to the “new normal.”

Lewis never felt anxious about contracting the virus and was successful. Along with following recommended guidelines provided by local and federal health organizations, Lewis attributes leaning into her faith in God to protect her.

Up until the start of the pandemic, Lewis was an active member of the community. She regularly attended local elementary and high school assemblies and spoke to students about her time serving in World War II.

Aftereffects of the vaccine

When Lewis learned she was eligible to get the vaccine, she had a few questions about her ability to withstand it given her age.

After speaking with her primary care physician, Thomas C. Dotson, M.D. of Novant Health UVA Health System Virginia Internal Medicine and Primary Care, he assured her that it was safe.

To her surprise, she experienced no side effects after receiving both doses of the vaccine – except a sense of pride that she was doing her part for the betterment of her country.

“It’s about realizing what’s really important,” Lewis added. “We need to live each day for God and for our country.”

Lewis urges anyone who is able to receive the vaccine to do so.

When asked what she’s looking forward to most upon returning to normalcy, Lewis said attending pizza parties with her friends, partaking in competitive bingo and being with her family for the holidays.

For more information about the COVID-19 virus and COVID-19 vaccines, visit NovantHealthUVA.org/coronavirus.