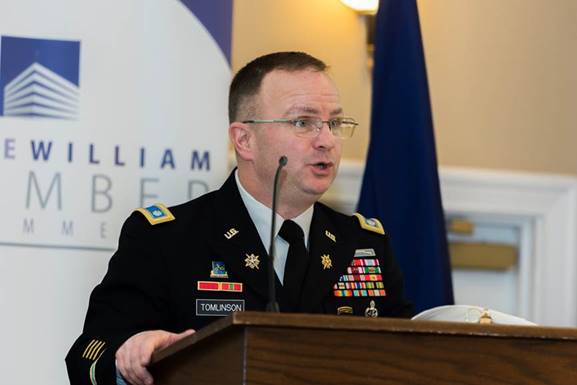 LTC Christoper Tomlinson spoke on behalf of Ft. Belvoir, highlighting some of the recent developments on the Army command, including being able to bring all elementary students housed on base into their on-base school this year. {Photo credit: Kathy Strauss, Imagewerks}

On January 24, over 200 members and guests of the Prince William Chamber of Commerce gathered for the 6th annual Salute to the Armed Forces Luncheon at the Clubs at Quantico & Crossroads Event Center, located on Marine Corps Base Quantico.  Presented by the Chamber’s Veterans Council, the luncheon is held each year to honor the outstanding contributions of the active-duty service members and Veterans across the Prince William and Northern Virginia regions. The 2017 event was full of surprises, from announcements by speakers to sponsors vocalizing their company’s commitment to serving and employing Veterans and their spouses.

PenFed Credit Union was the Presenting Sponsor, introducing Keynote Speaker Jaime Areizga-Soto, Deputy Secretary of Veterans and Defense Affairs.  The Deputy Secretary shared that the Commonwealth has a zero “functional” homelessness rate for Veterans, having answered a challenge issued by former First Lady Michelle Obama.  According to an April 2016 press release issued by Governor McAuliffe’s administration, the criteria for “functional zero” includes:

As is customary, the Salute also featured status reports from Fort Belvoir and Marine Corps Base Quantico, along with special recognition for outstanding soldiers and Marines. Quantico Base Commander, Colonel Joseph Murray shared a video announcing that his command will celebrate its centennial anniversary in May of this year. He also allowed the audience to witness a commendation ceremony usually only witnessed by members of a Marine’s battalion. He noted that recognizing young Marines before the community is one of his favorite things about the event. Corporal Richard Rossetti was recognized for exceptional performance of duty while serving as the Single Marine Program Representative, Volunteer Service Coordinator and Air Traffic Controller. The commendation noted his hours of personal time given to coordinate volunteer efforts and plan events for fellow single marines, as well as the five air traffic controller certifications that resulted from his efforts. Corporal Daniel Lawler was recognized for exceptional performance of his duties while serving as a Military Police Officer and Special Reaction Team Member. He was also named Non-Commissioned Officer of the last quarter of 2016 and the first quarter of 2017 for his “charismatic and vested interest in the growth of his fellow Marines.”

Warrior Sponsor Amazon Web Services (AWS) was represented by Shannon Kellogg, Amazon’s Director of Public Policy, who spoke on Amazon’s commitment to serving the needs of veterans and military spouses in Virginia and across the nation. To the delight of the Chamber crowd, he noted that at a White House event in 2016 (as part of the Joining Forces initiative), Amazon announced that the company had made a five-year commitment to hiring 25,000 veterans and military spouses. Kellogg also discussed the recently announced Amazon Veterans Apprenticeship Program, in collaboration with the Department of Labor, which will help create a pipeline of veteran talent for technical careers, and another collaboration with the Commonwealth of Virginia, Cyber Veterans Virginia, to provide veterans who live in Virginia with relevant training and a pathway to a career in cybersecurity. 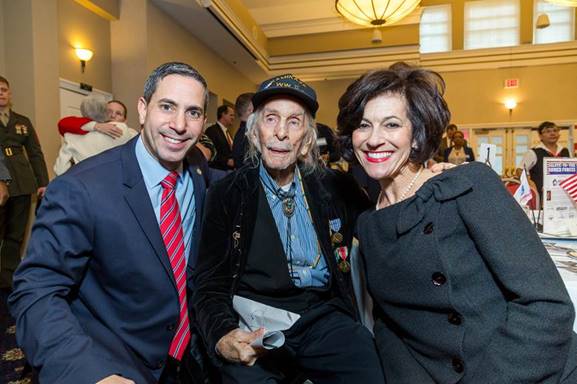 Ninety-four-year-old World War II Navy Veteran Chilton “Chilly” Raiford was the final speaker of the day, recounting the story of having lived through two Kamikaze attacks and rescuing fellow servicemen. Despite a room full of mostly Veterans and active-duty service members, the story, combined with Raiford’s fervent patriotism left many in the room choked up. PenFed Credit Union’s Vice President of Public Relations and Corporate Communications vocalized a sentiment shared by many in the room saying that she believed her dad (also a Veteran) would have been proud of her for working to better the lives of Veterans like himself and Mr. Raiford.

The program concluded with “TAPS,” honoring the service members who have made the ultimate sacrifice and played by retired Marine and Chamber member Harry Horning.