Tyler Settle, a junior at Patriot High School, and Khalid Shabazz-Williams, a junior at Stonewall Jackson High School, will play for the USA Football U-17 National Team and represent the USA against Canada in International Bowl X in January in Dallas. They were selected out of thousands of athletes across the country for these coveted spots. 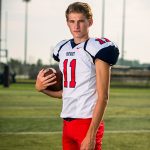 As a first-year varsity wide receiver this year, Settle had 35 catches, averaged 22.5 yards per catch, and scored six touchdowns. He was an All-District first team selection and selected for second team All-Region. Settle played wide receiver and quarterback as a freshman and focused on the wide receiver position as a sophomore.

Settle’s path to the U.S. National Team included his selection to attend a USA Football Training Camp in Canton, Ohio, this summer.

A two-sport athlete who runs track and plays football, Shabazz-Williams impresses as the number three leading receiver in the area. Selected as the number one wide receiver at the USA football camp DC Regional out of 36 receivers in attendance, he was also named to the All-District second team, received an Honorable Mention as a kick returner, and last year an Honorable Mention as a receiver. 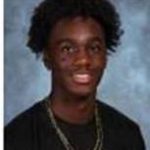 “Khalid is a tremendous student-athlete and a true team player. I am extremely proud of his dedication on and off the field,” said Stonewall Jackson High School Principal Richard Nichols.