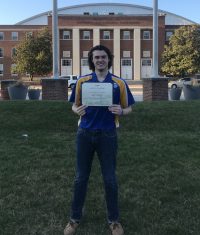 The Osbourn Park High School (OPHS) Metal Jackets’ President, Jack Palmer, is one of just four to win the Dean’s List Finalist Award at the FIRST Chesapeake District Championship.  Jack, a junior at OPHS and a Gainesville resident, will represent the Northern Virginia First Community in Detroit.

Jack Palmer stated, “STEM is a universal language that we all speak. STEM is the future. I am honored to represent the Northern Virginia FIRST community and to express my love for building new things, promoting STEM and Robotics, and encouraging the next-generation of robotics students.”

Mr. Palmer was selected as one of thirteen finalists out 120 applicants.  The announcement was made on Saturday, March 31 at the University of Maryland College Park Campus that Mr. Palmer will move on to Detroit to compete against the other FIRST Dean’s List winners.  He is a great example of student leaders, who has led his team and community, to increased awareness for FIRST and its mission.

The Kamen Family sponsors an award to recognize leadership and dedication of the most outstanding FIRST TECH Challenge students known as the FIRST Dean’s List. Since 2010, the FIRST Dean’s List Award has attracted the attention of prominent colleges and universities who desire to recruit FIRST Dean’s List students.  This award has been compared to the prestigious National Merit Scholarship Award.  It is the objective of FIRST that these individuals will continue on, post-Award, as great leaders, student alumni, and advocates for FIRST.

The FIRST World Robotics Championship will be held in Detroit from April 25-28, 2018 at the Cobo Center.