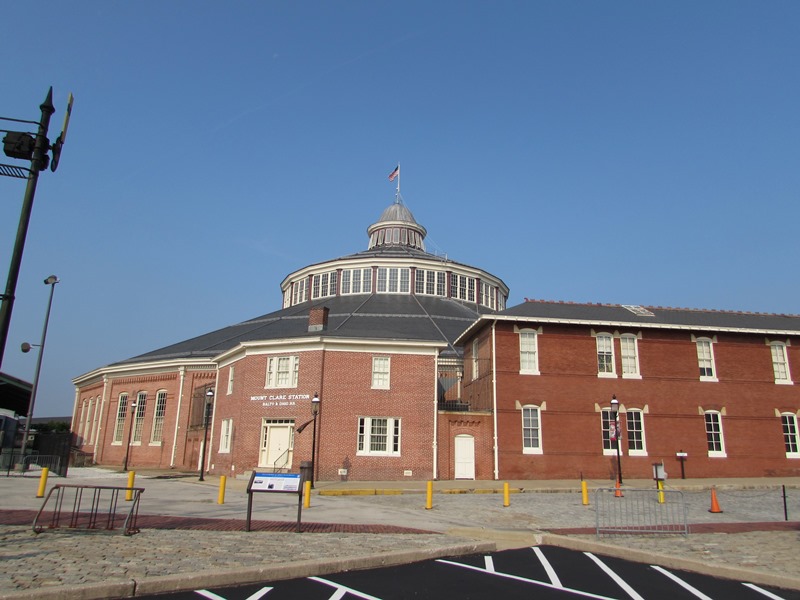 So you love railroads.  You love the toot of the horn, the sound of the roaring engine, the sounds of the wheels, and you count the cars as they go by.  Whether you are at the junction at Wellington Road in Manassas or at one of the VRE stations in Woodbridge, you are always drawn to the train.  Did you know that being in Prince William County that you are a little over an hour’s drive from where it all started?  It all began in the city of Baltimore.

Your journey begins at the Baltimore and Ohio Railroad Museum.  It is at this very place where the railroad began in America. PWL Housed in the Mount Clare Roundhouse where locomotives and train cars were serviced and repaired, you will see a collection of some of the oldest locomotives in the world, to include the Thacker Perkins which pulled the funeral train of Abraham Lincoln and the Number 1 shay locomotive used on the logging trains of Cass, West Virginia.  In case you are wondering, they cannot find everything in the roundhouse.  You must exit the roundhouse to find more of the rolling stock to include locomotives, box cars, passenger cars, hospital cars, cabooses and so much more, but wait, there is an old shop building across the way.  In here is where you will find the 5300 George Washington and the Alleghany locomotives.  Now you only think that you have seen everything, but there is more.  You are at the Baltimore and Ohio Railroad Museum, the museum of America’s first railroad.  Why not ride the first mile and a half of track.  Yes, you can ride a train the very first section of track in America.

So now you think you have seen it all.  Well, you have not.  While on the train, you were shown a mansion.  It is not just a mansion.  It is Mount Clare.  Yes, the roundhouse is named after this house.  Why?  Mount Clare is the home of John Carroll, Barrister.  The house predates the city of Baltimore which was built around the home that was once a plantation.  The home was handed down to James Carroll, and it was James who donated some of the land for the railroad, and the roundhouse was named in his honor.  You can access the house from the train, or you can take a five minute drive from the B&O Museum.

Be advised that you are not finished yet.  Just one block away on Lemmon Street is the Irish Railroad Workers Museum.  Housed in old row houses, the museum depicts the life of an Irish family who came to America, and the father worked at the Mount Clare Shops.  The curator of the museum cannot wait to show off their Irish heritage and how they shaped the community around the Mount Clare Shops.

There is more.  From the Baltimore and Ohio Museum, you can take the National Road, yes, the National Road west, and you make your way into the town of Ellicott City, a town built on the milling industry.  It is also the home to the oldest railroad station in America.  It is no longer a train station, but it is a museum where you can see how the ticket agent lived and where the passengers waited.  You can also enter the old freight house and see a model train display laid out in the way Ellicott City was in the days of passenger service.  There is also an old caboose that you can climb into.  If you are fortunate enough, you may see a freight train go by on the same track that brought passengers to the station.

After all of this, there is still more.  You can make your way to Elkridge, Maryland, and you can see the Thomas Viaduct, the oldest viaduct in America, and trains still cross this viaduct today.

Now you have just spent the day seeing the places where the railroad began in America.  The next time you go train watching, you can tell your rail watching buddies that you have seen the very beginning.