The interior of Rangoli is colorful, bright and spacious. The restaurant seats 110 people, including the seats at the bar.

Upon entering Rangoli, a new Indian restaurant in Manassas, delicate, mouthwatering scents greet you first, and a welcoming, professional staff is a close second. Eyes are drawn to the beautiful colors on the walls—handmade silk hangings, brightly colored artwork—and the gorgeous wooden bar, which invites people to sit down, relax and eat.

Rangoli is the creation of Kumar Iyer, a restaurateur with more than 25 years in the business. His business acumen, commitment to guests and passion for serving authentic food are apparent when speaking to him. “I love what I’m doing,” he said. “You need to do what you like to do.”

Iyer’s journey to Manassas originated in India upon receiving his training in hotel management and catering in 1992. He started working at hotels in India before joining a cruise line as an assistant food and beverage manager in 1997; after arriving in the United States in 1999, he worked in several corporate restaurant chains, continually learning the best practices of the industry.

The First Rangoli By 2005, Iyer was ready to put his skills and knowledge to the test by opening Rangoli at its first location in South Riding. At the Loudoun County location, he earned numerous awards and accolades and drew a devoted following. After his 10-year lease expired, he sought a new setting for his restaurant and opened the doors to Rangoli in Manassas in November 2016.

Business has been brisk, and while it takes time to establish a restaurant, Iyer noted, “We have brand recognition, so we aren’t quite ‘new.’” He estimates that about half of his guests come from South Riding despite the 30-minute drive.

One such guest is Robin Khare. She and her family have been eating at Rangoli since 2010, celebrating life’s moments both small and large: most weekends, Christmas Eve, Mother’s Day and her son’s birthday. They were ecstatic to learn that Rangoli had reopened in Manassas.

“Our family loves the new space,” Khare said. “It has lots of room, and the decorations are beautiful. We have taken many friends and family to the new location.” The interior is colorful, bright and spacious.

The restaurant seats 110 people, including the seats at the bar. Despite the popularity of the booths at the South Riding location, the Manassas one does not have them. Iyer said that he wanted more tables to accommodate larger parties and provide flexible seating arrangements for future events.

“Rangoli” is a traditional Indian art form in which patterns of chalk or colored powder are drawn free-hand on the ground or floor to celebrate a special occasion or to ward off evil spirits at the threshold of Indian homes. Indian women make the colorful and unique designs each morning. 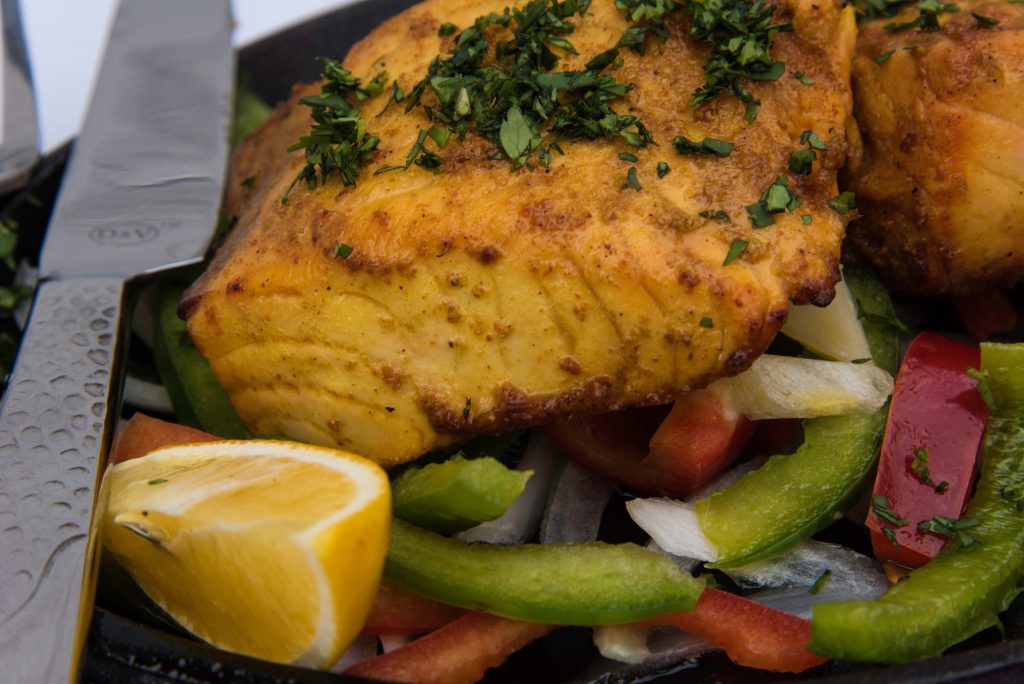 Diverse Indian Food Offerings When deciding the name of his restaurant, Iyer did not want to choose a name that would limit the cuisine. He felt that if the name included “Bombay,” for instance, then the food should come from that region. He wanted the flexibility to choose the most authentic dishes, regardless of region.

The menu reflects that, highlighting dishes from several parts of India: the Bombay burger (which is actually a spicy potato patty) from Mumbai; the fish molee from Kerala; the Goan shrimp curry from the western coast of Goa. Many of the dishes are vegetarian while some are gluten-free or vegan; other dietary restrictions may be accommodated by request.

The butter chicken, or chicken tikka makhani, is the restaurant’s most popular dish, according to Iyer. It is always included in the daily lunch buffet ($10.95), which offers a variety of dishes to tempt both vegetarians and carnivores. In addition to the buffet, Rangoli offers full-service lunch and dinner, online ordering and catering.

Carin Campbell, a quality assurance specialist for nearby American Type Culture Collection, recently stopped in to eat lunch and see the new space. Campbell lives in South Riding and used to dine with friends at the first Rangoli. Campbell loves the idea of a buffet at lunch. “It’s fresh and tasty! My favorite is the butter chicken,” she said. “I also ate a fantastic dish that was creamy with peas and chicken.”

“It’s off the beaten path, but it’s large, airy, beautiful and welcoming,” she continued. “It seems like it’s in a growing neighborhood.” Campbell pointed out that it’s near other local attractions as well—Prince William Innovation Park, Freedom Aquatics and Fitness Center and the Hylton Performing Arts Center, among others.

Rangoli is located in a small strip mall off of Nokesville Road between Godwin Drive and Wellington Road. It is easier to spot its next-door neighbor, Vertical Rock Indoor Climbing Center, while driving, due to the position of the climbing center in relation to the street.

Elizabeth Pearson works at the climbing center and is more than happy about its new neighbor. “Everyone who works there is friendly, and they’re great neighbors,” she said. Pearson added that she often sees clients from the climbing center eat at Rangoli afterwards.

“I eat there all the time,” she said, and she usually fills a takeout container with butter chicken, rice and naan from the buffet. “The food is amazing!”

Rangoli is located at 10223 Nokesville Road in Manassas. For more information, visit rangolirestaurant.com.

Jennifer Lazzo ([email protected]) is a freelance editor and writer. She earned a BA in technical journalism and political science from Colorado State University. She lives with her husband and twin girls in Montclair.