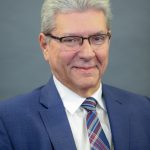 The Board of County Supervisors announced Raul Torres as the new Executive Director of the Human Rights Office. Torres comes to Prince William County after 19 years as the Assistant County Manager for Arlington County overseeing human rights, EEO and ADA.

“My life’s work has been devoted to helping build communities that are free from all types of discrimination,” Torres noted. “It is an honor to be named as the Executive Director for Human Rights in Prince William County and to continue serving the public in such an important and meaningful role.”

Torres is a Certified Public Manager and earned his master’s degree in Labor Law from George Washington University Law School and his Juris Doctorate in Business Law from the University of Puerto Rico Law School. Prior to public service, Torres was a partner in a private law practice. He is a member of the Arlington County Bar Association and the Virginia State Bar Association, and admitted lawyer to the Commonwealth of Virginia, Commonwealth of Puerto Rico and District of Columbia.