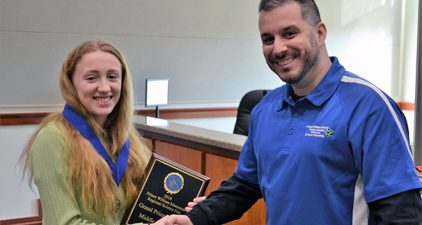 Anya Mischel, an eighth-grader at Reagan Middle School, won the Grand Prize in the middle division of the Prince William-Manassas Regional Science and Engineering Fair, held on March 10 at the Kelly Leadership Center.

Anya’s project was “A Microcosm of the Cosmos,” in which she used a concept called gravitational lensing and preexisting data to deduce the percentages of dark matter and baryonic matter in galaxies and galaxy clusters.This indicated whether the dark matter is found within the galaxies or in the space between them in a cluster. Her teacher is Jennifer M. Heilen.

Over 200 young scientists from Prince William County and the cities of Manassas and Manassas Park participated. These young innovators represented their high and middle schools after winning top honors as first and second place finalists at local science fair competitions.

First-place winners in the middle division qualify to apply to the Broadcom MASTERS, the premier national competition with a $25,000 Samueli Foundation prize for the first-place finalist.

In the senior division, all first-place winners are eligible to compete at the Virginia State Science and Engineering Fair, and the grand prize winner is nominated by the fair to take part in the Intel International Science and Engineering Fair on May 17 in Pittsburgh. For a complete list of awards and winners, please visit the Science Fair webpage.

Congratulations to all participants for their impressive achievements!