Annual fundraiser brings in $105,000 in less than three hours.

On November 2nd, the steering committee of 38 women held their third annual “In The Bag” silent auction of designer purses to benefit the American Red Cross of the National Capital Region. The committee, chaired  by Brenda Blisk, CEO of The Blisk Financial Group and Founder of In The Bag, raised $92,000 net  at the lunchtime event, held at the Hilton McLean. 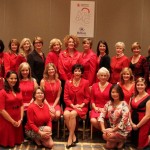 mmittee collects and auctions off designer purses to help fund the vital services provided by the Red Cross to the Metro Washington community. The event sold 148 high-end purses with brand names such as Louis Vuitton, Chanel, Jimmy Choo, Lanvin, Michael Kors and many more.  The crowd of 225 (223 women and two men) attended this year’s luncheon and auction.

Brenda Blisk welcomed the attendees to the event and stated what was “not” known about the American Red Cross:  they supply 40% of the nation’s blood supply, receive no Federal money, and meet 2 planes of wounded soldiers at Andrews Air Force Base weekly.  She introduced this year’s featured speaker retired Major Heather Penney, the first woman in the DC National Guard to fly the F-16 Viper.

Maj. Heather Penney and Dr. Jolanda Janczewski gave keynote speeches during the luncheon. Penney, a third-generation pilot, was one of two pilots protecting us and our nation’s capital in response to the 9/11 terrorist attacks.   Dr. JolandaJanczewski is Chairman of the Board of Consolidated Safety Services-Dynamac Corporation whose father made his way out of a Nazi Concentration Camp to the USA because of the Red Cross.

To learn more about this annual event, visit www.redcrosspurses.com.