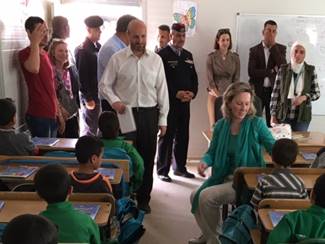 “As believers around the world observed Holy Week, I appreciated the opportunity to visit and hear from those who serve our fellow man – our military men and women and national security leaders, our State Department and diplomatic leaders, and our humanitarian partners serving the refugee population. The work they have done is extraordinary and it was instructive to see how they work together to meet the challenges of the refugee population and the region, and to bring more stability to the Mideast.  We met with the mothers, fathers, teachers, health care providers, and children at the refugee camps and heard from them about life in these camps and the desire of the refugees to be able to go home, and the vital support they still need. It’s clear that Americas’ leadership in the region is essential to marshal the international community, and our allies and strategic partners – in order to restore stability and reinvigorate our common goal of eliminating the threat of ISIS and terrorism.”

Background: The trip included multiple stops at refugee camps in Zahle and Azraq as well as a UNHCR refugee registration center in Amman. It was an opportunity to meet with Syrian refugees and see the impact of the crisis first-hand. 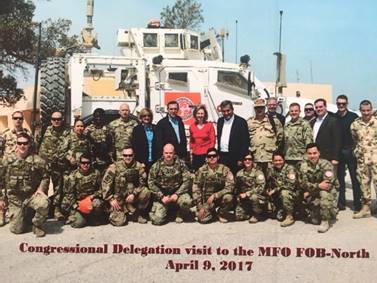 Rep. Comstock and the bipartisan Congressional Delegation visiting U.S. troops in the Sinai.

In Egypt, the delegation met with Egyptian President Al-Sisi to discuss strengthening the US-Egypt relationship and to foster collaboration in confronting the threat of ISIS and other extremist groups. The delegation also attended Palm Sunday Catholic Mass with the U.S. troops deployed in the Sinai and conducted a roundtable on economic development with top government officials and representatives from Egyptian businesses.

In Lebanon, the delegation met with the Lebanese Minister of Education before visiting area schools and a refugee camp in Zahle. Schools have been some of the most-impacted resources by the refugee crisis. As many as two-thirds of refugees receive no schooling at all and, as the U.N. reports, “in Lebanon, there are more school-age refugees than the entire intake of the country’s public schools,” which has forced many schools to run in multiple shifts to accommodate as many students as possible.

Members also visited the Marine Memorial and laid flowers to pay homage to the servicemen killed in Lebanon in the 1983 Beirut barracks bombing. They also met with Lebanese Prime Minister Saad Hariri to discuss continued US support for Lebanon and efforts to help maintain stability in the country.

In Jordan, the US Representatives met with Prime Minister Hani Al-Mulki and other key officials to enhance ties between our two nations and gain valuable insight into challenges presented by regional turmoil and the continuing refugee crisis there as well. Afterward, the delegation traveled to the UNHCR refugee registration center in Amman and visited with displaced families at the Azraq refugee camp.