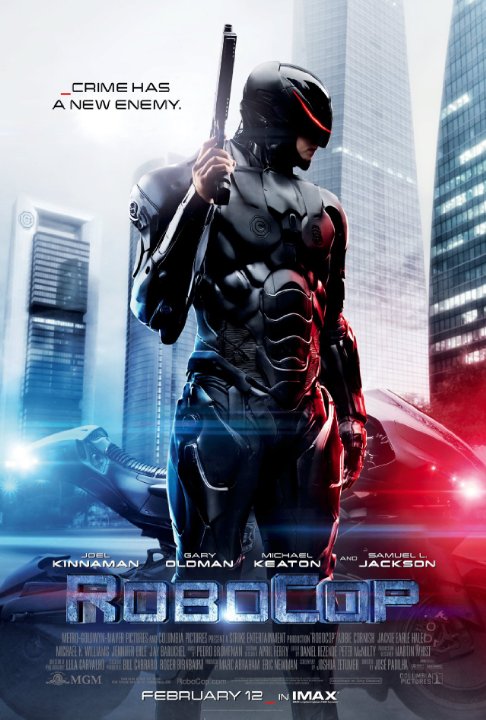 Today I am ashamed to admit I saw “RoboCop,” the 2014 model with all the fancy upgrades. Not to be confused with Paul Verhoeven’s “Robocop” from 1987 that came out at the same time as Windows 2.0 and worked just about as well.

In this reboot, we find Officer Alex Murphy (Joel Kinnaman from “Safe House”) trying to get illegal guns off the street of his beloved Detroit. He is shocked to find some corrupt cops right in his own department. I could make a reference to Bogart and “Casablanca” here, but only my daughters would get it.

In 2028, the setting for this futuristic farce, OmniCorp has developed incredible robot cops that are deployed all over the world, keeping law and order. However, they are forbidden for use in the United States, until the evil corporate giant can put a better “face” on it – Alex’s face.

So, this took about an hour of screen time, and that is when I tried to walk out. I was met by a Regal employee who said, “Would you like a large popcorn for just three dollars more? Would you like a 2-gallon soda to wash it all down? Would you like a movie that is not a remake that stinks more than these little pizzas?”

I did see the rest of the movie, and the robotic plot did not surprise me for a nanosecond.

This movie spends most of its time on the technology and special effects and not enough on the people or the theme of the movie. There is a nod here and there to society’s preference for safety over liberty, and that all these problems can be solved with a better toaster – I mean robot.

There was little of the fun or humanity of the ’87 edition in this update. With a hip “Iron Man” in today’s world, the whole thing seemed tired and rundown. I sure hope they pull the plug before they make any sequels. Oh, and if you can find a worse Michael Keaton role or performance I will mow your lawn.

The only thing half interesting was Samuel L. Jackson (“The Avengers”) as Pat Novak, the right-wing nut pushing the country toward complete robot automation of the police force. The scary thing is that he has hair in this movie and looks exactly like Al Sharpton.

For that, I give this movie 1 star out of 5, and I recommend you take the large popcorn for three dollars more so you don’t end up on a list.