The City of Manassas hosted a groundbreaking ceremony today with partners from The Northern Virginia Transportation Authority (NVTA) and the Virginia Department of Transportation (VDOT) to mark a Route 28 Widening Project that will reduce traffic congestion, increase safety, and include a bike/pedestrian shared use path. 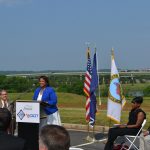 Planning for the widening project began in 2004 and the impacts will be noticeable. “The Route 28 widening project will help improve the quality of life for all those who live and pass through the City of Manassas and this stretch of 28,” Manassas Mayor Michelle Davis-Younger said. “The time we lose in traffic is time we could have spent with family and friends, which is precious. Adding capacity and safety features to this important road will help us get where we are going more quickly and safely. We are also excited about the new shared use path that will help us grow our trail system and offer a safe way for bicyclists and pedestrians to get around.”

The project will be completed in conjunction with other Route 28 improvements and will have a region-wide impact, said Phyllis J. Randall, Chair of the NVTA and Chair of the Loudoun County Board of Supervisors.

“The Route 28 widening is an exciting milestone for the Authority because it’s the first groundbreaking on a NVTA-funded project we’re celebrating in the City of Manassas,” said Randall. “The project is truly regional in nature, aimed at reducing congestion on a high-volume corridor running through the Cities of Manassas and Manassas Park, and the Counties of Prince William, Fairfax and Loudoun.”

The widening project ties into other NVTA projects west of the 234 Bypass, which provide 4.5 miles of a connected network and total nearly $70 million in regional funding. The NVTA has also funded 10 multimodal transportation projects in the Route 28 corridor, totaling $284.2 million.

“Like many projects in Northern Virginia, funding is done in partnership with a variety of sources,” said Dic Burke, VDOT Transportation and Land Use Director. “This project is being brought to fruition with federal, state, NVTA, and local funding, and is another successful example of where critical regional coordination moves projects forward.”

The project will include: