Provided by the Freedom Museum 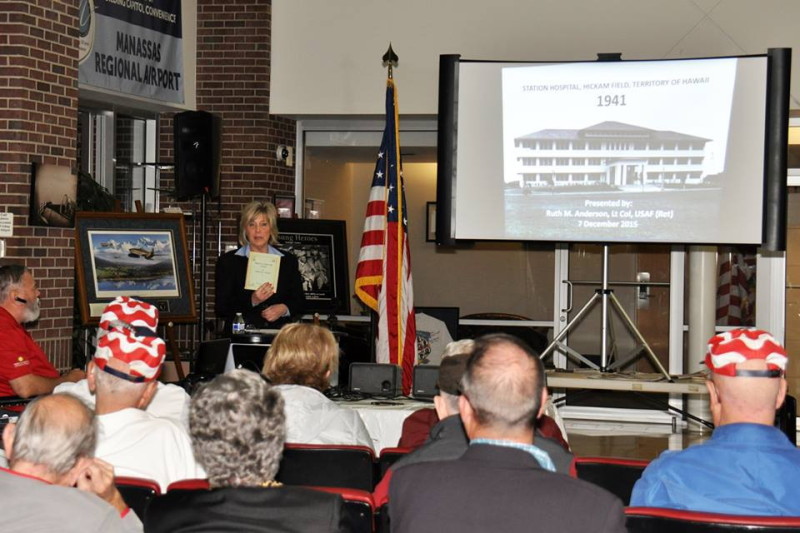 LTC Ruth Anderson discusses a First Aid book during her speech on Pearl Harbor Day
at the Freedom Museum.

December 7th 1941, Pearl Harbor Day, was remembered at the Freedom Museum with a presentation by Lieutenant Colonel (LTC) Ruth Anderson, USAF-retired. During her US Air Force career, LTC Anderson spent four years at Hickam Air Force Base, Hawaii, commanding a Squadron of nurses located at the base hospital. While on duty at Hickam AFB, LTC Anderson “could not resist finding out more” about the history of December 7th. She was surprised to learn that the current headquarters building was originally the barracks and cafeteria which had been bombed on that fateful day.

She began to rediscover the WWII history of the base. She met three of the original nurses, women who were in their 80s, who were assigned to the brand new base hospital while in their early twenties in late 1941. The hospital was so new that many of the beds had not yet been assembled. All three of the nurses joined the Red Cross to serve in the military because they wanted travel and adventure, as the military did not have its own nurses. After the beginning of the WW II, the military accepted Red Cross Nurses as US Army 2nd Lieutenants and commissioned the Red Cross Nurses already supporting the military.

Two of the nurses, twin sisters, Sara and Helen Entrikin, were assigned to Hawaii. One was at Hickam Field and the other at the Naval Base Hospital at Pearl Harbor. The hospitals were very close each other. The third, Monica Conter, was at Hickam Field. Monica recalled that she had been to a party with her future husband, 1Lt. Bernard Benning, on December 6th and made plans for a picnic on the afternoon of the next day. At around 7:55 AM, all three heard the sound of airplanes flying low and thought it was a very realistic exercise. Then they heard loud explosions, saw the Japanese airplane markings, and suddenly they were thrust into the fear of attack and the duty of dealing with the horror of combat casualties. PWL The casualties arrived at the hospitals any way they could while bombs dropped around them. Some casualties were walking, some were on stretchers, and others were carried lying on doors. Hickam’s 44-bed hospital was so filled that the covered front porch had to be used as a hospital ward. The receipt of wounded went on for days. Another nurse at Hickam Field hospital that day, 1st Lieutenant Annie Fox, the hospital’s Chief Nurse, became the first nurse to receive a Purple Heart as a result of the action that day.

During her tour in Hawaii and after meeting Monica Conter Bennning, LTC Anderson decided to host a Christmas dinner party that was planned for later that December but never served. She invited survivors of that infamous day, especially Monica, and used the same menu that Monica had made for the party that she planned but never saw happen.

LTC Anderson discussed the information she gained about the attack and showed photographs, videos of the three nurses discussing that day, and artifacts to enhance her very interesting presentation.

Mrs. Anderson is the current Supervisor-elect for the Occoquan District on the Prince William County Board of Supervisors and is married to Delegate Rich Anderson, Colonel, USAF-retired.

The Freedom Museum is located in the Manassas Airport Terminal, 10600 Harry Parrish Blvd., Manassas, VA 20110. Admission is free and further information and directions are at www.freedommuseum.org. This presentation is part of the Freedom Museum’s Quarterly Speaker