I have borrowed this title from a book by the same name written by Rabbi Arthur Waskow. The book explains the festivals of the Jewish year, their rituals and scriptural readings, and – most interestingly to me – their agricultural origins. Rabbi Waskow is a respected progressive rabbi with a focus on environmental justice in his work, and I found his ability to weave Torah, ancient history, and modern practice together profound.

With Earth Day having just passed on the secular calendar, allow me to share with you some of the ancient ways that Judaism has paved the way for modern environmentalism and how Jewish members of the eco-movement derive support from our sacred traditions.

We are currently in the period between Passover and Shavuot, which historically coincided with the barley and wheat harvests, respectively. When the Temple in Jerusalem still stood, Jews would bring a portion their barley harvest as an offering to God on the second day of the week-long festival of Passover. On the one-day holiday of Shavuot, they would bring their offering of wheat. The ancient Hebrew unit of measurement for this was called an “omer”. Still today, without a Temple to bring offerings to, Jews around the world count the “omer,” starting on the second night of Passover, and ending the night before Shavuot, a period of 49 days.

Though the majority of Jews are no longer farmers and an even greater number of Jews would disagree with any attempts to rebuild the Temple and return us to sacrificial practices, we still connect with our ancient traditions by counting these days. Each day is associated with a mystical or moral value, like patience and kindness or strength and mercy. These offer us the opportunity to meditate on these values and reflect on how we relate to our earth and our food in a time when we are so disconnected from our agricultural roots. 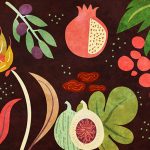 If you have ever read the Book of Leviticus or are familiar with Jewish practice, you may know that Jews are commanded to abstain from eating the meat of pigs or shellfish, bottom-feeders and scavengers, and a host of other things. Kosher meat must come from a particular set of animals, sometimes only certain parts of the animal, slaughtered and butchered in a particular way, overseen by a certified authority, and cannot be served with any dairy products.

As our agricultural industries have grown, this has left out a number of ethical and health concerns that the practice of keeping kosher was presumably originally intended to be mindful of. Jews who want to keep kosher and are also concerned with things like the cleanliness of the meat-packaging plant, the dignity and safety of the workers, the health and freedom of movement for the animals, the ecological concerns of where and how farms are built up, and so on, have started a new movement (evolving over the last 50 years) called “eco-kashrut.”

This movement encourages kosher-keeping Jews, especially meat eaters, to be mindful of more than the kosher certifying stamp on the package of our food. It encourages less factory-farmed and highly processed food and more locally grown and organic foods. It has given birth to businesses like Grow and Behold, which offers kosher certified meat that is also grass-fed with no hormones, humanely raised and slaughtered by humans who work in fairly paid and safe environments, and shipped all over the country. It is unfortunately quite expensive, and shipping can raise other ecological concerns. But with idea gives me hope that it might one day be easier to eat ethically sourced food, connecting us back to our ancestors who only ate what they themselves could grow for their communities. 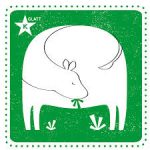 Shavuot falls this year on June 8. At Congregation Ner Shalom, we will be having a vegetarian potluck and study session in the evening, starting at 6:30 p. m., followed by an overnight lock in for the teens in our community, and ending on the morning of June 9 with an early festival service.

A traditional meal for Shavuot is comprised of dairy products. There are a number of explanations for this ancient practice that doesn’t seem to have a singular source, but the most common explanation is that the Israelites did not have the proper rules of kashrut while they awaited the revelations at the foot of Mount Sinai. So, as we simulate their night of preparations for the holy moment, we too abstain from eating the meat that our ancestors couldn’t have known how to prepare.

I would like to assure you all that in keeping with the updated practices of eco-Kashrut all the food at our Shavuot celebration will be ethically sourced by well-treated labor sources, from grass-fed dairy cows milked on their natural schedules. However,as we know, the more organic something is, the more difficult it is to obtain, and I can’t require someone else put in that kind of effort for a potluck meal.

What I can assure you of is that I, as a community leader, live a reasonably eco-friendly lifestyle within the restrictions of social living in this fast-paced industrial world. We have some amazing youth at Ner Shalom very committed to recycling, cleaning up litter, and fighting climate change. I have faith that our future is safe thanks to the knowledge and drive of the next generation, who may or may not know that they are living in keeping with the sentiments of the Torah, which tells us to care for our Earth.

Lizz Goldstein is the rabbi at Congregation Ner Shalom in Woodbridge, the only synagogue in Prince William County.  She resides in Vienna and also works to build Jewish community among millennial activists in the DC area.  She can be reached at rabbi@nershalomva.org or through nershalomva.org/