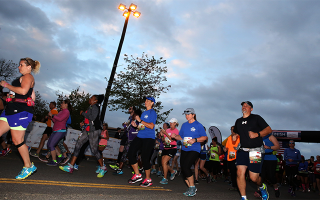 The second annual “Novant Health-UVA Health System Prince William Half-Marathon” will be held on Sunday, Oct. 1. Like last year, it will begin and end at Jiffy Lube Live.

Participants will run along University Boulevard to U.S. 29 North where they will turn around just before the intersection of Sudley Road. There are three additional loops off U.S. 29 where runners will follow the course around New York Monuments Loop, the parking lot at Deep Cut and the loop around Brawner Farm.

Therefore, residents and travelers should take note that U.S. 29, between University Boulevard and Sudley Road, will be closed that day from 6:00 a. m. to 10:30 a. m. Spectators for the event will not be able to access the course. There will be a number of activities at Jiffy Lube Live throughout the duration of the event, including live bands, entertainment and food for sale.

Dulin said a number of participants will be from Prince William County, but the race has also attracted people from out of the area. “To do some of the larger races, you had to go into D.C., Fairfax, Richmond. So, we really wanted to do one right here in our own backyard that would be for Prince William County residents, but would still attract people from out of the area. We have 20-plus states that will be represented in the race.”

According to the Prince William Half Marathon website, the race was rated by “Run Washington” as one of the top half marathons in the Washington, D.C., area. Dulin said runners like the moderately difficult course with rolling hills and good scenery. “There are a couple of things that we really like about the course. Number one, it goes through some of the areas of the Manassas National Battlefield Park that are just beautiful. The other thing that we like about the course is that it’s gorgeous on Route 29. When you drive it, you don’t necessarily take the time to look around and take it in. It’s a really nice run, very scenic.”

A bonus for county residents is that they won’t have to leave home too early to make the 7:00 a. m. start time, Dulin said.

Dulin credited the success of last year’s race to the support they received from county officials, Prince William County police and fire departments and the Virginia Department of Transportation. “There’s a lot of moving parts to a race, and we were thrilled with how everything came together last year.”

Residents can see a map with real time road closure information in the county by visiting pwcgov.org/roadclosures. In addition to the map, the application also includes a feature where the user can sign up to receive notifications about road closures via text or email through the Prince William Community Alert Network.