The hustle and bustle of everyday life can sometimes lead to our being too plugged in and not taking time to enjoy the simple things. At  some point we all need to slow down, back away from the computer and enjoy the wonders of the great outdoors.

Luckily, Prince William has a number of close-to-home options for unplugging and immersing yourself in nature. On the eastern end of Prince William, Occoquan Bay National Wildlife Refuge (NWR) and Featherstone NWR are two options that are well worth adding to your list of local getaways.

Occoquan Bay and Featherstone, along with Elizabeth Hartwell Mason Neck NWR in Fairfax County, together became the Potomac River NWR Complex in 1998. This reorganization allowed for better management of administration, resources and funding. Occoquan Bay NWR, previously a military research site, is situated at the conﬂuence of the Potomac and Occoquan rivers and oﬀers an array of activities for nature lovers.

“Visiting the refuges is like going to a magical place,” said Joan Patterson, of the conservation-minded Friends of the Potomac River Refuges (www.foprr.org). “You never know what you are going to see. It’s like ‘Where’s Waldo?’ with nature. You use all your senses to see what you can discover. It is a great way to reconnect with nature.” 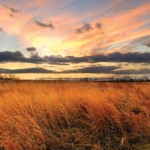 It is rare to ﬁnd such a large mix of undeveloped grassland and marshland so close to the nation’s capital. Yet at the end of Dawson Beach Road oﬀ Route 1 in Woodbridge, Occoquan Bay’s 642 acres contain more than four miles of trails for hiking and biking as well as open waterways for boating. Common wildlife sightings include white-tailed deer, red fox and beavers, as well as various amphibians and reptiles.

“Sometimes, one can ﬁnd arrowheads on the shore or see bald eagles soaring overhead. You may also see dozens of rabbits foraging by the drive in the evening or huge turtles digging holes for their eggs in the spring. You can hear the occasional cries of a bobcat at night,” said Rob Hartwell. His late mother Elizabeth was an environmental activist who was instrumental in protecting the Potomac River refuges. Mason Neck is dedicated to her.

The trails in Occoquan Bay lead through a variety of animal habitats and are moderately easy to navigate. They are designed  to accommodate any level of endurance, from a quick jaunt to  an all-day hike. This “something-for-everyone” accessibility is  part of the charm that attracts nearly 20,000 visitors to the refuge each year.

Hunting enthusiasts can also participate in wintertime deer hunting at Occoquan Bay. Permits are made available through a lottery system managed by the Federal Wildlife Service. Applications are due by July 31 each year, and can be found at www.fws.gov/occoquanbay. A Novice Youth Deer Hunt and Workshop is also held here, for new hunters aged 12 to 18. 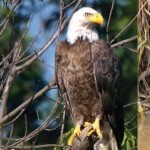 Looking for something a little more secluded? To area nature lovers, Featherstone NWR is known as “the hidden sanctuary” due to its isolation from commercial and residential development. Nestled on a narrow strip of land on the shore of the Potomac, it is only accessible by non-motorized watercraft. It may be one of the best places in Northern Virginia to truly get away from it all.

Surrounded by marsh and wetlands and blocked oﬀ by train tracks, Featherstone nearly became a landﬁll site for the District of Columbia in the late 1960s, but local activists and a last- minute act of Congress saved the day. Since its establishment as a wildlife refuge in 1970, Featherstone has oﬀered a combination of boating, woodland hiking and solitude.

Explained Refuge Manager Greg Weiler, “If you have a kayak, you can launch it and have a pleasant paddle into the refuge and see all the wildlife and pretty much have the entire area  to  yourself.”

For birdwatchers, it’s common to see both neotropical (the geographical zone that extends from Central Mexico to the tip of South America) migrants and grassland-dependent species stop here to nest and refuel during their travels. Typical sightings include red-headed woodpeckers, owls, eastern bluebirds, American robins and several species of warblers. At the shoreline, feeding opportunities are plentiful for red-tailed hawks, ospreys and the beloved bald eagle. Featherstone is also a haven for waterfowl, and visitors are likely to see a variety of wood ducks and mallards.

Both Occoquan Bay and Featherstone are open year-round. If you plan to visit Occoquan Bay NWR during hunting season— November through January—call the Potomac River NWR Complex oﬃce at 703-490-4979 to make sure the refuge is open to the general public that day. Entrance fees at Occoquan Bay are

$1 for those who hike or bike in, or $2 per motorized vehicle.

There is currently no fee to access Featherstone. For more information on these environmental treasures, visit www.foprr.org.

Lisa Collins-Haynes lives in Woodbridge with her husband and daughter and is a freelance entertainment and travel writer and self- professed out-of-control travel spirit (OCTS). She invites everyone to follow her travel blog at www.octsblogger.wordpress.com. She can be reached    at    lhaynes@princewilliamliving.com.