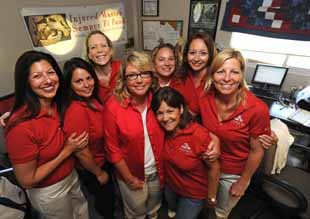 This story begins in the spring of 2003 when the U.S. military mission Operation Iraqi Freedom began. The engagement’s first wave of wounded Marines and sailors landed at Camp Pendleton, a U.S. Marine Corps Base in California. There, Karen Guenther, a registered nurse and spouse of an active-duty Marine, saw firsthand the challenges they faced as they returned from Iraq.

Guenther, along with a dedicated group of other spouses of military service members, began to organize welcome-home activities at the camp hospital. The group also arranged travel for family members who couldn’t afford airfare, and, through the generosity of donors, the spouses provided a specialized van for a quadriplegic Marine. Additionally, they assembled and distributed care bags filled with toiletries and phone cards.

And the injured kept coming.

Realizing that a growing number of families across the nation were facing similar situations, Guenther assembled a team to expand these initial efforts into a nationwide nonprofit organization she founded in 2004. Its mission was clear: to provide critically injured and ill service members from all branches of the Armed Forces with immediate financial aid and quality-of-life solutions to lift the burdens of their new reality, so that their families could focus on their loved one’s recovery. The group’s first official headquarters: Guenther’s kitchen table.

In the years since, the Semper Fi Fund, based at Camp Pendleton with an office also in Quantico in Prince William, has transformed the lives of thousands of wounded service members and their families. The Fund now has a staff, plus hundreds of volunteers across the nation and overseas.

The success of the Fund has been far beyond what organizers first envisioned, due to the extraordinary generosity of patriotic citizens across the country, said Guenther. As original members, who continue to operate the organization today, look back on its development, they believe that divine intervention helped the Fund surpass its goals, she said. “Serving those who preserve our freedom” is the Fund’s motto. 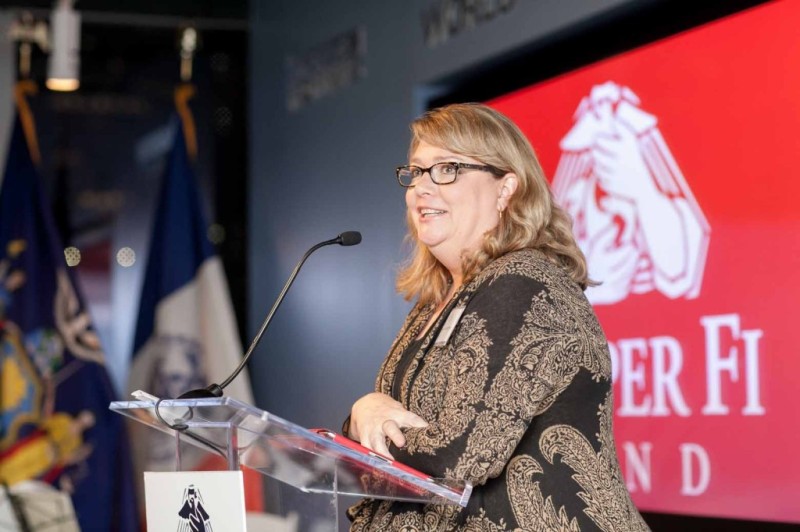 The Marine Corps motto is “Semper Fidelis,” which in Latin means “Always Faithful” and is often shortened to “Semper Fi” in Marine Corps contexts. The Semper Fi Fund’s goal is to embody

the spirit of this motto to the fullest and to always be there faithfully helping heroes in need. The organization directs urgently needed resources to post 9/11 service members who meet criteria for assistance.

Guenther, whose spouse is an active-duty U.S. Marine (Col. Glenn Guenther), has more than two decades of experience in nursing and remains the inspiration behind the Fund, which is also known as the Injured Marine Semper Fi Fund.

“We have 20-year-olds who are catastrophically injured and will need help for the rest of their lives, and we have dedicated our lives to make sure that they have the best quality of life possible. We need Americans to not forget,” stated Guenther, the Fund’s president and CEO. “Our concern is that if we do not keep our service members in the headlines, people will forget. … We need to remind America that our [severely injured]service members need their support for decades. They have sacrificed so much for our freedom and democracy that we have to be faithful to them.”

Under Guenther’s leadership, the Semper Fi Fund has been recognized as one of the premier non-governmental organizations supporting service members and their families. The Fund has consistently earned the highest marks from the charitable industries’ foremost and well-respected regulators. Beginning with only $500, the organization has grown to reach $88 million in donations since it started. This month marks its 10-year anniversary.

The Fund relies completely on donations from individuals, corporations, foundations and community groups, according to the organization’s website. In an effort to keep fundraising and administrative costs low, the Fund does not receive government funding or use direct mail campaigns. Communities across the country host fundraising and awareness events to spread awareness of its mission, Guenther said.

“There are numerous ways that people can help. We have over 400 events that take place every year worldwide, from golf tournaments that raise hundreds of thousands of dollars to the lemonade stands that children put together. We are thankful for them all,” she said.

“We enjoy hearing about the different ways people organize fundraisers for us. We have had elementary schools organize walks to benefit the Fund—just so many wonderful events,” she added.

The Fund is not without challenges, however. Organizers’ efforts to help qualified post 9/11 service members and their families have had to intensify due to the increasing severity of injury, illness and post-traumatic stress unique to the length of war on terrorism, Guenther said.

“We realize we have done a lot over these past 10 years, but there is more work and more challenges ahead. We need our communities to stand with us so that we make sure our veterans are taken care of,” stated Guenther.

“On a local level, people can volunteer their time helping during our events or organize one of their own,” she said. “During the Marine Corps Marathon, we need volunteers to hand out water and cheer on the runners. The best way to contact us about volunteering is to go to our website and send us an email.” The annual Marine Corps Marathon is Oct. 26 this year in Washington, D.C. For more information or to volunteer, visit https://semperfifund.org/updates/2014-semper-fi-fund-team.

For more information about the Semper Fi Fund, visit www.semperfifund.org. Like the organization on Facebook to receive updates on events and news.

Amanda Causey Baity, Prince William Living’s marketing director, is a photographer, crafter and blogger and owns Beau Monde Photos. She can be reached at acausey@princewilliamliving.com.