Woodbridge, VA- Semper K9 Assistance Dogs, local veteran service organization, has recently adopted a pair of rescue puppies! Meet Tink, one of the pups who is now training to be a service dog for a wounded veteran. Tink and his brother are 10-week old german shepherd/lab mix puppies that were rescued by Operation Paws for Homes.

Semper K9 has a unique way they name their dogs. They select from nominations from the public of service members who have made the ultimate sacrifice or gone on to do great things in their life after service. Tink is named in memory of USMC MWD (Military Working Dog) Handler Cpl David Michael Sonka. As a child, Tink was the nickname David’s mother had given him. 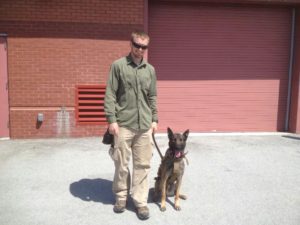 On March 31st, 2013, David and his MPC (Mulit-Purpose Canine) Flex were deployed to Farah Province, Afghanistan with Marine Special Operations Team 8223 in support of Golf Company Team 3. On May 4th, 2013 David and Flex were providing overwatch for a meeting between SOF and Afghan military personnel, when an Afghan Army soldier opened fire, mortally wounding them both and another Marine, Eric Damon Christian.

If you would like to know more about Tink, Cpl Sonka, and Semper K9, visit their website at http://semperk9.org/dogs/tink. You can follow Tink’s progress on social media by searching the hashtag #SemperK9sTink.