Senator Colgan is retiring after 40 years in the Virginia Senate preceded by four years on the Prince William Board of County Supervisors.  He is the longest serving Virginia Senator in the history of the Commonwealth.  The Tribute “celebrated a leader who embodies service”. The year-long planning effort was led by three co-chairs: David Brickley, Mike Carlin and Jimmy Hazel.

The evening began with a VIP reception at 5:30 pm. in the Lovey Hammel Lounge. This was followed at 6:30 pm. by an hour-long reception that filled the Didlake Foyer, Gregory Family Theatre and the Buchanan Art Gallery with well-wishers.  The Linton Hall School Fife & Drum Corps greeted guests outside while the Manassas City Schools Guitar Group and the Manassas Park Schools Choral Singers added ambiance within the Center. Gregory Family Theatre was filled with Colgan memorabilia commemorating both his public and private life.

Virginia Governor Terry McAuliffe began the Tribute’s formal festivities by toasting Senator Colgan.  This was followed by Hylton’s own Jennifer Decker singing a Colgan favorite, the official traditional state song, “Our Great Virginia”.  Guests were then ushered into Merchant Hall for a poignant and humorous “Charles J. Colgan, Sr. – This is Your Life”.  They were welcomed there by George Mason President Dr. Angel Cabrera. 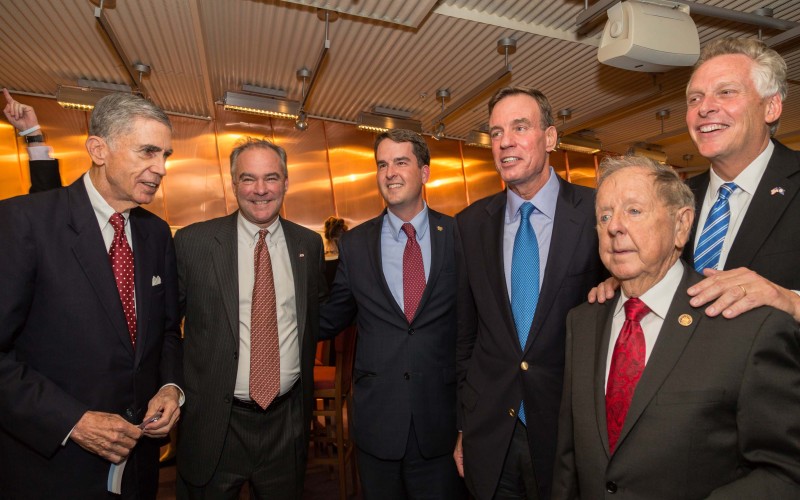 Former Virginia Delegate Dave Brickley was the Master of Ceremonies and portrayed a modern-day Ralph Edwards, the host of the 1950’s TV show, “This is Your Life”.    Several long-time family and business friends whom Colgan hadn’t seen in years were surprise guests.  Numerous photos from family albums and news archives illustrated the Senator’s life on a large screen.

The final portion of “This is Your Life” wrapped up with examples of the numerous accomplishments during Senator Colgan’s 40 years in Richmond.  It was followed by Chuck Colgan humbly and quietly thanking his 700+ colleagues, family members and friends for giving him the opportunity to serve and for honoring him with such a tribute.

The evening ended with more than 30 Colgan grandchildren and great grandchildren joining him on stage and surrounding him with their love as Jennifer Decker sang “You Raise Me Up”.  Ms. Decker was then joined by all in Merchant Hall in standing and singing “Happy Birthday” to Chuck Colgan who turned 89 on Friday.   Colgan grandchildren wheeled a lighted birthday cake on stage.  There wasn’t a dry eye in the house.