Contributed by the Prince William Chamber of Commerce

Prince William, VA – US Senator Mark Warner began his presentation to more than 100 members of the Prince William Chamber of Commerce, the largest chamber in Virginia, with an expression of praise of the organization’s goal to enhance economic opportunity and quality of life in Prince William.  “To see Prince William evolve, grow to be a great place to live and do business….[that]is something to be proud about,” said the Senator. 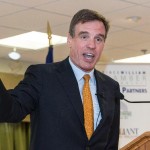 Senator Warner went on to say that the $17 trillion national debt is the largest crisis our nation has ever faced, bigger than any war, and encouraged business leaders to hold politicians accountable for seeking big solutions to the problem.  He noted that both political parties contributed to the current situation, and that both parties must work together to solve it.

“This can’t be a Democrat solution, or a Republican solution. [Solving the financial crisis] needs to be an ‘American Solution’,” said Warner.  He said that it is time to reevaluate priorities, taking a balanced approach that looks at both revenues and expenditures.  The Senator called for a reexamination of the structure of entitlement programs such as Medicare and Social Security and simplifying the tax code.   He added that making incremental changes over the course of the next 15-20 years, such as raising the age of retirement, would shore up the sustainability of these programs.

Warner also shared his commitment to creating a National Infrastructure Bank, housing finance reform, and addressing the questions of our aging population.  He noted that the US currently spends less than 2% of its GDP on infrastructure.  He commended the Virginia legislature for approving a transportation funding package during the last General Assembly session and noted that more investment needs to be made on the federal level.  “We can’t succeed [as a nation, as a business community]without more infrastructure investment,” said Warner.

In speaking about the effects of Sequestration, Warner noted that “there is a smart way to make cuts….but this [sequestration]is stupidity on steroids.”  He went on to say that the growing gridlock on Capital Hill that led to the implementation of sequestration is also what is holding back our economic recovery and growth.  “We are poised to come roaring back [as an economy]but the growing dysfunction of government is what holds us back,” said the senator.

According to Warner, when legislators show that Democrats and Republicans can work together, it has a positive effect on the psyche that will cause the public to regain confidence, increasing investments and consumer spending.  Senator Warner stated that the business community plays an important role in making sure that happens.  He encouraged business leaders to not let policymakers off the hook, saying that they should demand solutions of their elected officials.

The luncheon, held at Westminster at Lake Ridge, was part of the Chamber’s Leadership Series, which connects business leaders with policy makers at all levels of government.

“We are proud to host Senator Mark Warner in Prince William,” said Prince William Chamber Vice President of Government Relations Nancy Hiteshue.  “We strive to empower our membership, giving them the tools they need to shape a strong business environment.  Programs like this one provide local business leaders with first-person insight on policies and issues at all levels of government.  It reminds legislators that our Chamber members are engaged in the political process.”

“Senator Warner is always very forthright about addressing the serious issues we face as a country, and we think that the chamber members benefited from hearing his perspective about these issues.  VF&N was pleased to sponsor his appearance at the Chamber lunch,” said Randy Frostick, Esq, of Vanderpool, Frostick & Nishanian, P.C., luncheon sponsor.  Transurban is the Chamber’s Advocacy Vision Partner.