Three times a week at 9 p.m., as the skaters from SkateNFun Zone on Sudley Road in Manassas leave the public skate, the women of the NOVA Roller Derby file in to begin their practice. The ladies practice on Mondays, Tuesdays, Thursdays and some weekends.

“I’ve been on skates since I could walk,” said Melissa Tomlinson (A.K.A. Bayou City Badazz of the Vineyard Vixens), who moved from Houston to Prince William. “When I found out I could be on skates and play sports, that was amazing. I got some new skates, strapped them on and tried out. That was in October 2011, and I started playing in March 2012.” 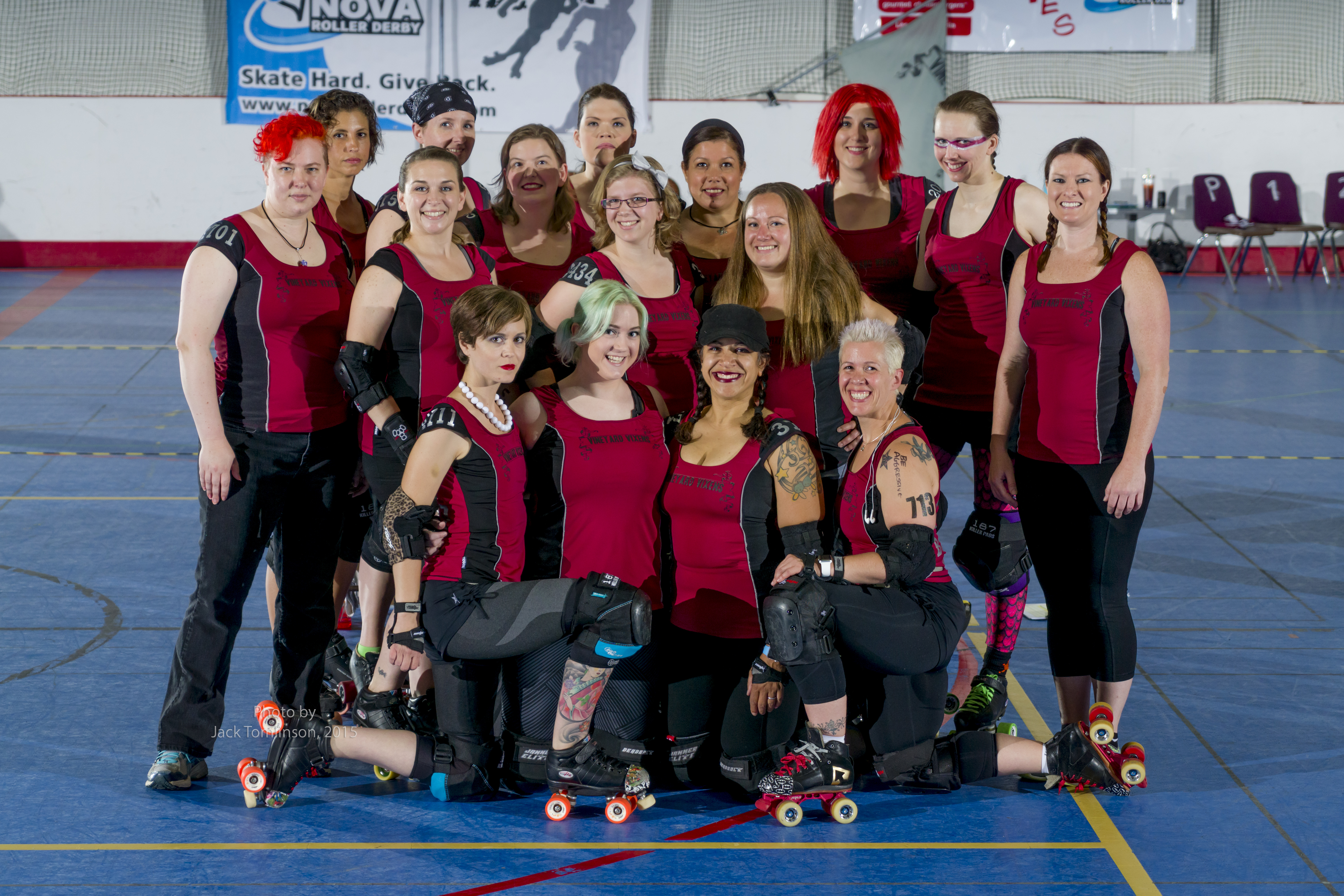 Although all women over the age of 18 are eligible to play (with proof of insurance), the league offers a mandatory 12-week Essential Skills program. According to the league website, novarollerderby.com, the programs run throughout the year to provide skaters with no derby experience—or those who need to brush up on their technique—basic derby skills, strategy and a skill assessment.

Manassas resident Chelsea “Smalls” Codrick (A.K.A. Killin Em Smalls of the Metro Misfists) recently completed the course. “I went through the essential skills course, and in November I had to pass a test that makes sure we are safe for ourselves and other people, plus a written test,” said Codrick, mother of a twoyear-old. “Once you pass the test, you can be entered into the draft and be drafted by any of the three home teams. I’m on the Metro Misfits.”

Her first bout was in July. “Derby is a hobby, but it is a commitment, and it is a really fun enjoyable sport,” Codrick said. “You can get out there and let out all of your aggression.”

“Spectators should expect a fun, family-friendly event that will last about one-and-a-half to two hours,” Tomlinson said. “We have gone more in an athletic direction instead of a spectacle direction. Now you see more athletic girls taking up the sport, and it brings it to a different level.”

Tomlinson, a personal trainer in her time off of skates, said players leave it all on the track. “We all practice together, and then we play against each other,” she said.

“When it’s over, we all go out and have drink and eat dinner. We are all friends.”

The league motto is “Skate Hard. Give Back.” For each bout, the league partners with a local nonprofit.

“The idea of giving back was something that was hugely important to the women who founded this league. It was a group mentality,” said Julia Bergeman (A.K.A. Mary Lou Wreck’em), who tore her ACL and is handling the league’s philanthropic endeavors while on leave. “The sport of roller derby gives so much to its participants—from exercise and camaraderie to competition and self-confidence. It only makes sense to pay it forward!” 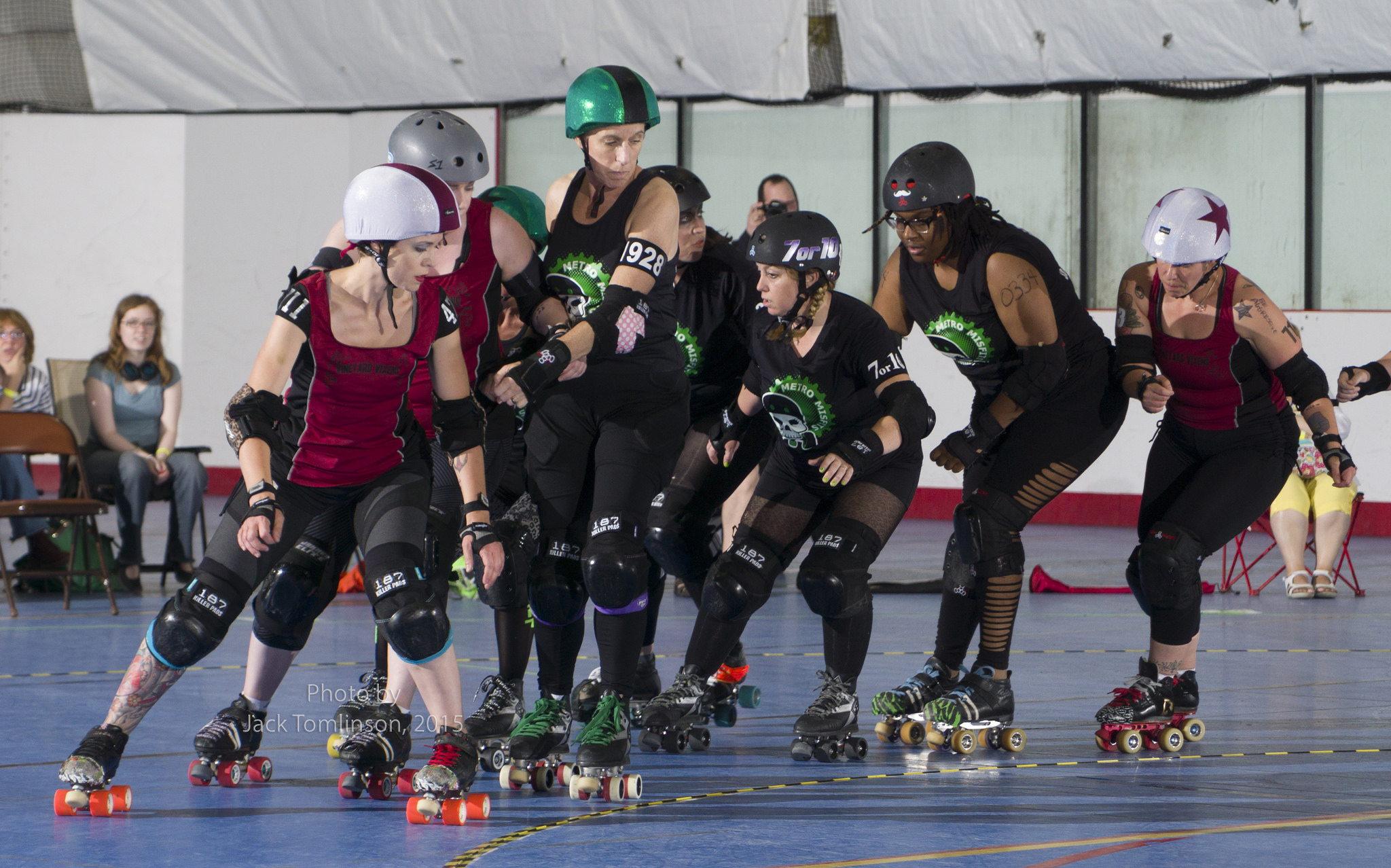 Spectators can expect a fun, family-friendly event that lasts about two hours. Photo by Jack Tomlinson

Each month, she said, the league chooses a charity to support.

“The charity is promoted in relation to our monthly bout, and our fans are asked to bring a small item to donate to the charity,” Bergeman said. “We’ve collected everything from clothes to toiletries to canned food. As an added bonus, the charity is invited to host a table trackside to collect donations, pass out literature and mix and mingle with our fans (we usually have between 200 and 500 in attendance).”

Last year, one of the charities the league chose to support was Semper K9, a Manassas-based organization that enhances the quality of life for wounded, critically-ill and injured members of the U.S. Armed Forces and their families by providing assistance dogs. Using rescued and donated dogs, the organization provides service dogs to wounded service members for psychiatric alert and mobility challenges free of charge.

“Our first roller derby experience was with NOVA Roller Derby as one of their benefitting charities for their bout,” said Christopher Baity, Semper K9 executive director. “We enjoyed learning about the rules and talking with patrons there. People were asked to donate items from our wish list, and we received lots of great things that we have used with training our service dogs. We were also able to educate patrons about service dogs, what service dogs are, how they help people and specifically about our mission. We enjoyed having an engaged audience to speak to about service dog etiquette and laws.”

Season Tickets on Sale Now NOVA Roller Derby 2016 season passes are on sale at brownpapertickets.com/event/2493034. The $60 pass grants admission to all home games during the 2016 season as well as special to-be-announced scrimmages and private events. Bouts are held at the Michael & Son Sportsplex in Sterling. Doors open at 3:30 p.m., and bouts begin an hour later.

Marianne Weaver ([email protected]) is a freelance editor and writer. She earned a B.A. in English from the University of Pittsburgh and an M.J. from Temple University. She lives in Gainesville, Va., with her husband and two children.