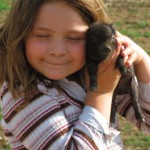 Sierra Smith, 8, shows her affection for one of the piglets on her family’s farm, a fully-operational “Virginia Century Farm” that pasture-raises animals without hormones or animal byproducts.

Like most working parents, Brad and Leigh Smith have to make sure their children’s homework gets done and the housework isn’t overlooked. But unlike most parents, they also must tend to 3,500 chickens and 120 Angus and Scottish Highland cattle.

Then there’s the sheep, pigs, goats and turkeys; the nine farmers markets to stock and the more than 2,800 Twitter followers to keep up to date. For Smith Family Farm’s owners, it’s all in a day’s work—though sometimes it’s a very long day.

Smith Family Farm, located in Gainesville near Manassas National Battleﬁeld, is the only “Virginia Century Farm” in Prince William County—meaning the same family has owned it for at least 100 consecutive years, and a descendant of the original owner lives on or farms it.

Unlike many 21st-century farms that have rejected traditional farming methods, Smith Family Farm embraces them. The Smiths pasture-raise their animals without hormones or animal byproducts and without sending them to feed lots to be fattened before slaughter. “Just the way things used to be raised,” said Leigh Smith. The farm is U.S. Department of Agriculture- inspected and a Virginia quality-assured beef producer.

Customer David Parrish of Dale City said he purchases meat from the family at the Dale City Farmers Market “because we had heard so many things about grass-fed beef. It’s got a very clean taste. I feel better about eating it,” he said. “There are so many problems with processed foods. I feel better about coming here.”

Customer Kathy Bradish of Woodbridge buys eggs and pork chops from Smith Family Farm. “It’s a local farm, and I want to promote local farms,” she said, adding that the Smiths’ food also tastes better. “They know what they’re doing.” 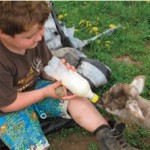 While her husband was born into farming, “I married into the farm,” Leigh said. Before marrying Brad in 2003, she had never done this type of farming, she said. “I always wanted to raise healthy meats. It was a passion of mine,” she said.

She ﬁrst sold their pasture-raised meat at the Clifton Farmers Market more than eight years ago, from the freezer of a single truck. The Smiths now sell eggs as well as stock two freezers with beef, chicken, lamb and Thanksgiving turkeys at ﬁve seasonal and four year-round farmers markets in Virginia and Washington, D.C. In Prince William, they sell at the Dale City and Gainesville farmers markets.

Every day the couple moves their animals to pasture as soon as weather permits and then to fresh grass. With some help from their children, Shiloh, 9; Sierra, 8 and Eli, 5, the pair do most of the farm tasks themselves, including bottle-feeding orphaned lambs and calves, gathering and washing chicken eggs and processing chickens once a week.

The couple hires help to man stalls at farmers markets and to mow 900 acres of hay at Manassas National Battleﬁeld, per a contract with battleﬁeld management. Selling the hay to the horse community supplements the family income.

While Brad is in the hay ﬁelds, Leigh shears sheep. “It takes awhile to get it all done. The kids are a big help,” she said.

“We don’t get a lot of time [off],” Leigh said. “Monday is our day to sleep in. And for us that’s about 7 a.m. We work every weekend.” Even during winter, a slow season for most farms, “you have to deal with the lambs. There’s always something to do,” she said. “We’re very tied to the farm.”

Like other farmers, the Smiths contend with wild animals. One year they lost 300 young turkeys to raccoons, Brad said.

Some nights they lost up to 50 chickens to coyotes and foxes— expensive at $10 to $25 per pullet (young chicken). The family got two Great Pyrenees puppies for the purpose of guarding the chickens from predators, Brad said. One night the dogs, still new to the farm, caused a commotion. “We thought at ﬁrst the dogs were killing the chickens,” he recounted. “But they were herding them back away from the fence.” Since the watchdogs arrived at the farm, no chickens have been lost to predators, he said.

Unpredictable weather is another challenge. A violent storm last year ﬂipped the structure where the family kept about 100 turkeys to protect them from coyotes and foxes. The Smiths lost all the birds, which were just days from being slaughtered for market.

Although it means much to Brad to use the same land and pastures as his great-grandparents, he contends with something they never dealt with: growing pressures of urbanization as more subdivisions are built nearby.

“People don’t like you on a tractor,” he said. “They don’t like the smells that come from a farm. They’re used to seeing farms through magazines. People need to understand that where their food comes from starts with us [farmers]. … You’re trying to do something better for them and for you. … In an urban setting there’s got to be give and take. … I don’t think people understand what it takes to farm.”

Preparing the Next Generation

Asked whether he’d like his children to continue the family’s farming tradition, Brad said, “I’d love the kids to stay… They are still very young and it’s hard to know what they’ll do or where their interests lie. One thing is for sure; they’ll never be left without memories and stories.”

The kids are becoming a big help as they get older, Leigh said. Touring the farm on four-wheelers, they check on the animals. “We make sure that our kids are part of everything,” Brad said. “We want to make sure that when it comes down to it that they are able to do what they need to.”

“They are an amazing family. They try so hard. They have so many challenges—just like any farmer would,” said Agent Paige Thacker of the Virginia Cooperative Extension in Prince William County. “They just want to farm. You want to see that Century Farm survive.”

Carla Christiano is a native of Prince William and a technical writer and editor for Unisys. Thanks to Brad Smith, she now knows what a red comb on a chicken means. She can be reached at cchris[email protected]cewilliamliving.com.