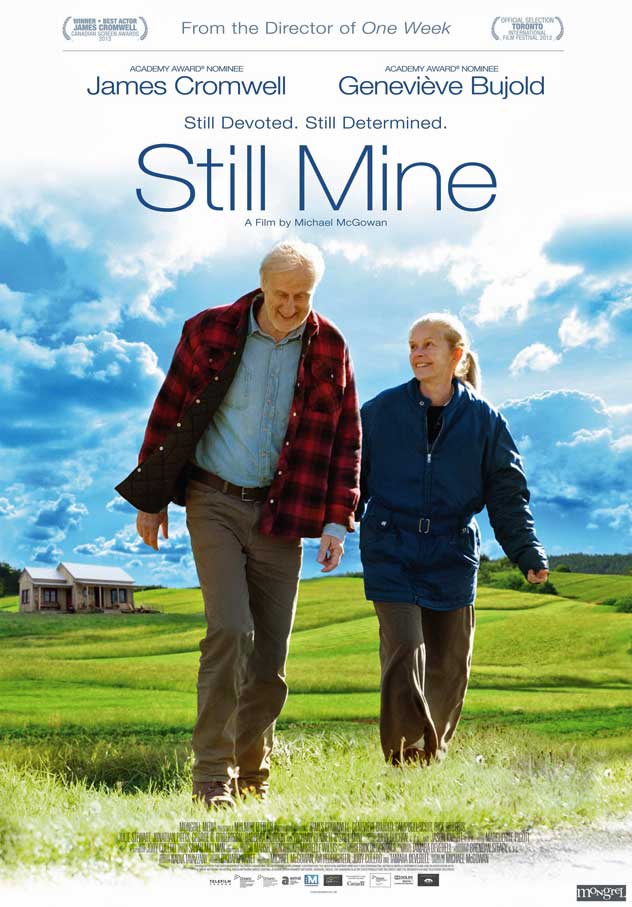 The Indie feature “Still Mine” is hard to find, but six other geriatrics and I saw it this afternoon. The movie is new, but the people in it are very old. Michael McGowan (Saint Ralph) wrote and directed this little gem, which is based on a true story in Canada.

Craig Morrison (James Cromwell from I, Robot) and his wife Irene (Geneviève Bujold from Disappearances) have been together for 61 years. They live on a farm and don’t need any help from their seven children or anyone else. When Irene’s health starts to decline, Craig decides to build a new, smaller, one-level house for them. The building permit process annoys him, but he eventually gives them a set of plans and starts to build. By this time he has pissed off the building official because all his wood came from trees on his property and did not have nice little grading stamps. He also does other things the old way, so they issue him a stop work order and threaten to put him in jail and bulldoze the house.

I have to tell you, in my expert opinion, Craig built a good house. He even got a bunch of other experts to certify that his work exceeded the code requirements and was structurally sound and safe. The government did not agree, and Craig kept building while they warmed up the bulldozer and a jail cell.

This movie may not have a lot of appeal for people under 50, as the lead characters are in their late 80s. I do think it is a good parable about where ones principles come from, and how they are measured. Craig’s work is excellent and the end product is superior to any other new house. However, it does not fit into the cookie cutter pages of the bible that the building official thumps. Every piece of the house is built with Craig’s own hands, using skills taught to him by his father. Craig knows he only has one house left in him, and he needs this house very soon for Irene.

Both Cromwell and Bujold give stunning performances, almost up to the “On Golden Pond” caliber. The movie is visually gorgeous and seems to get by just fine without any explosions, CGI or aliens. Some of you young whippersnappers may find it a little slow, but it’s just a good old fashion movie about some good old fashion people. And for that, I give this movie 3 ½ stars out of 5. If you need reading glasses to find this movie, I highly recommend you see it.