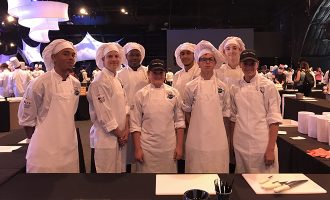 Culinary students from Patriot and Potomac High Schools faced off against 600 students from 55 schools across the country in the seventh annual “Cook Around the World” competition, bringing home awards and memories to last a lifetime. Potomac High School students represented Europe and took home second place in the Entrée division for their delicious chicken carbonara. Patriot students placed third overall with their lemon cupcakes.

“This was Patriot High School’s third year participating in this hospitality and culinary event,” said Emily Stevenson, culinary arts teacher. “Our celebrity chef judge and host was Food Network’s Chef Aarón Sánchez. Patriot’s students were in the improvisational competition, which means that there were only basic elements and themes given to prepare ahead of time.

“We had an hour and a half to design, cook, and plate dishes and cupcakes from our assigned continent, Africa,” Stevenson said. “It was amazing! Stressful and tiring, and amazing!”

The competition was broadcast on big screens around the room, “like the shows that you would see on television,” said Ronald Evans, culinary arts teacher at Potomac. Three students from Connecticut were on Potomac’s winning team.