Donzell Murphy, Jr., never crawled. One day, he just got up and started walking. It was then that his parents, Donzell Murphy, Sr., and Lisha Murphy, knew their son was somewhat diﬀerent from other children.

Donzell, Jr., has big dreams for the future. “I want to become a master for my (Tae Kwon Do) school and an Olympic champion,” he said. 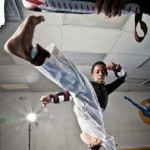 Donzell Muphey, Jr. , hopes to someday represent the U.S. in Tae Kwon Do at the Olympics. Photo Courtesy Jonathan Thorpe.

The 11-year-old sixth-grade honor student, who attends Rippon Middle School in Woodbridge, is “poised to become a world (Tae Kwon Do) champion, national champion, and eventually go to the Olympics,” according to his Tae Kwon Do coach, Master Patrice Remarck, the owner of Remarck Sport Tae Kwon Do (RST) in Alexandria.

“He is extremely gifted,” said Remarck. “He has the same ability as older athletes.”

Remarck, who has a 6th DAN black belt in Tae Kwon Do, should know. A Tae Kwon Do World Champion and 1988 Olympian, Remarck is the founder of Team RST. Originally from the Ivory Coast, he has lived in the U.S. for 26 years and is well on his way to becoming a U.S. citizen. He has more than 30 years of competition and teaching experience in Tae Kwon Do and is recognized as one of the world’s best coaches. Since becoming a coach in 1996, he has trained Olympians, World Champions and Junior Olympians in the Korean martial art. His small Alexandria school is one of the top three in the nation.

“He is a natural athlete,” said Donzell, Sr. “No one outworks him in practice. He has that drive. That’s something a good athlete has to have.” 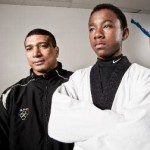 In addition to Tae Kwon Do, Donzell, Jr., also excels in football. This year, he played for the Dale City Ravens in their 10- and 11- year-old unlimited weight category, and was named MVP for the league.

“The (football) coach calls him Little Amazing,” Donzell, Sr., said. “Any sport he plays, he’s on a high level. He is just the ultimate competitor.”

“He started kicking and doing athletic stuﬀ around three,” Donzell, Sr., explained. “Around three he started doing back ﬂips. He was always a daredevil.”

Donzell, Jr., keeps a full schedule. After school, he ﬁnishes his homework, and then attends Tae Kwon Do practice in Alexandria, which ends at around 8:30 p.m. Afterward, said Donzell, Sr., he may watch television until nine, but then it’s time for bed. His weekends are equally busy. Still, Donzell, Jr., ﬁnds time to enjoy other activities, like playing Xbox games, watching television and movies. He’s also recently picked up the trumpet.

Donzell Jr.’s mother, Lisha Murphy, couldn’t be more proud of her son and his accomplishments.

“I’m just excited that he can do all the things that he does,” Lisha said. “Of course I don’t want him to play football because he’s such a tiny guy compared to most kids, but he hasn’t gotten hurt. He’s tough and can handle himself. I’m okay now with it.

As for Tae Kwon Do, Lisha says she enjoys seeing her son ﬁght. Ultimately, though, she just wants him to be successful in whatever he chooses to do.

“That’s all I can ask for him,” Lisha said. “And just be a good citizen, get a good education—a well rounded education—and ﬁnish college. And that’s pretty much what I want for him. I just hope he does very well growing up and everything.”

Donzell, Jr.’s biggest fan is his grandmother, Samira Murphy. “I try to go to all of his events,” Samira said. “And I have made just about all of them. I’m really proud of the little fellow. He’s pretty special. Right now, he’s young and he has fun doing what he’s doing. He loves it. I’m just there to support him and if he’s having fun, that’s all the better.”

Already, Donzell, Jr., has amassed more than 50 awards in Tae Kwon Do, including, in 2010, a gold medal at the George Mason University President’s Cup Tae Kwon Do Championships; a silver medal at the Virginia State Games in Hampton; bronze at the Hampton Sports Festival, also in Hampton; and gold in the Annual Friendship Tournament in Chesapeake. He was also a top qualiﬁer for the U.S.A. Tae Kwon Do (USAT) National Championships in 2010, although he was not able to attend because of last year’s Snowmageddon. This year, he hopes to be able to qualify for the 2011 USAT National Championships, which will be held July 2–3 in San Jose, Calif.

“He’s told me, ‘Daddy, I’m going to be famous one day,” said Donzell, Sr. But if he doesn’t attain that fame through Tae Kwon Do, perhaps it will be through science, which is one of his favorite school subjects.

“He says he wants to be a scientist,” Donzell, Sr., said.

Samira believes Donzell, Jr., has the potential to become one of the world’s greatest athletes. “If something comes from this and I hope it will, then that’s great,” she said. “But if not, he’s having fun, and that’s what matters.”