The Brentsville Jail is steeped in fascinating history dating back to the 1820s, and you can be a part of it! The Prince William Historic Preservation Foundation (PWHPF) is currently raising funds for museum exhibits and interpretive services at the jail. The jail, which is part of the 29 acres that make up the Brentsville Courthouse Historic Centre, has recently been restored. Now the goal is to turn it into a monument to the varied history that it holds.

Ten exhibit spaces inside the jail will each have a special focus, such as 19th-century crime and punishment, slavery and African American history, historic architecture and building techniques, and local history. 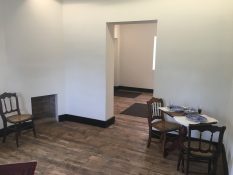 A room in the Brentsville Jail

Individuals and businesses who support the Brentsville Jail Project with a donation of $10,000 or more have an opportunity to be publicly recognized as a sponsor of one of the exhibit rooms. In addition, the PWHPF is currently conducting a short-term $5,000 match project. Once they have collected $5,000 in donations from the public, they will match it with an additional $5,000. And if you’d like to be a part of history, you can donate $250 and have your name placed on the donor wall in the hallway of the jail. The ultimate goal is to raise $100,000.

Meaghan Reddick, Vice President of the Board of Directors of PWHPF, believes that the Brentsville Historic Centre has much to offer to local families and hopes that it can become a major resource for the school system, homeschoolers and weekend visitors.

Mark Trbovich, President of the Board of Directors of PWHPF, shared the board’s enthusiasm for the Brentsville Jail Museum. “We are excited to be a part of working to get one of Prince William County’s historic treasures, the Brentsville Jail, totally interpreted for today’s tourist and future generations to come,” he said.

He also encouraged the public to donate to this worthy cause. “Please consider supporting the jail project with a greatly-appreciated donation today. You’ll be making history!”