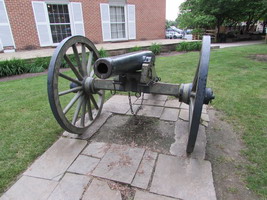 When people think about visiting Gettysburg, Pennsylvania, the number one thing that comes to mind is the Gettysburg Battlefield.  People from all over the world come to see this site where a massive turning point in American history took place.  Although the battlefield is the big place in town, there are so many other places to see while visiting Gettysburg, and many of these places were a part of or had significance to the battle.

The Eisenhower National Historic Site was a farm where President Dwight D. Eisenhower had his retreat from Washington, D.C., and it was a meeting place where he met with world leaders.  You can take a guided tour of the farm house and a self-guided tour of the grounds.  The site is operated by the National Park Service, and you can get tickets at the Gettysburg National Battlefield Park Visitor Center.

If you go to the center of town (Business U.S. 15 and U.S. 30) at the southeast corner of the square, you will find the David Wills House.  David Wills was an attorney and superintendent of the local schools. It was in his house that Abraham Lincoln put the finishing touches on his famous Gettysburg Address.  It is also operated by the National Park Service. An admission is charged, and only street parking is available.

If that is not enough for you, there is also the Gettysburg Museum of History at 219 Baltimore Street. The Jennie Wade House at 548 Baltimore Street is where twenty-year-old civilian Jennie Wade was struck by a stray bullet.  Guided tours of the home are available.  You can also visit her grave in the Evergreen Cemetery which is across the street.

Other museums include the Shriver House, the Gettysburg Diorama, the Seminary Ridge Museum, the Gettysburg Heritage Center, the Lincoln Train Museum and the Rupp House.  Most of the museums are open year-round; you may have to make numerous trips to see everything.  If that is not enough, you can see the Train Station where Abraham Lincoln arrived.  There are also many great restaurants and shops.  All of this is a relatively short drive from Prince William County north on U.S. 15.

You have seen the battlefield.  Now you can see the other places that make Gettysburg a great town to visit.