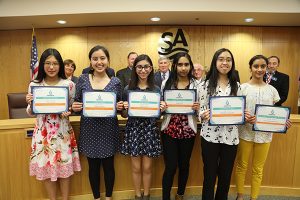 2018 Science Fair Winners and Service Authority Board of Directors

Six students from four middle and high schools in Prince William County and Manassas were awarded certificates and cash prizes for their water and wastewater-related entries into the March 10 event.

Seputro’s sister Madeleine teamed up with Anika Iyer of The Governor’s School @ Innovation Park to place second in the High School Division, while Thu Luong of Porter Traditional and Anisha Ramakrishnan of Ronald Reagan earned a second place and a General Manager’s Award, respectively, for their separate Middle School Division entries.

An aspiring environmental scientist, Chica tested four fruits to see which one was most effective in filtering water. She determined that coconut was more effective than filters made from tomatoes, apples or bananas.

“What really made the coconut-based filter stand out from the others was the fact that it lowered the bacteria almost completely,” said Chica. “Also, the water from the coconut filter was completely clear, making it safer and more pleasant to consume.”

Chica’s project was not only recognized by the Service Authority but also by the U.S. Public Health Service, the Federal Water Quality Association, the American Association for University Women and Keep Prince William Beautiful.