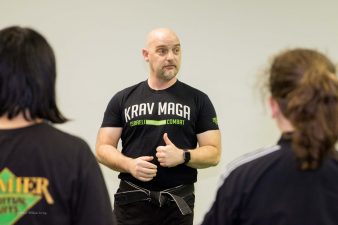 About three years ago, Woodbridge resident Katie Cubbon found herself alone and riding Metro late at night. A friendly person by nature, Cubbon was used to leaving work earlier when more crowded conditions provided a “safety in numbers” comfort.

This night, though, few others rode the subway car. “It was one of those situations that as women we try very hard not to be in, and it occurred to me that I wouldn’t know how to protect myself if something happened.” The next morning, Cubbon started her search for self-defense schools.

Krav Ma-What?
“Krav Maga is a quick, effective, self-defense style. It is easy to learn and easy to use,” said David Ortiz, school manager at Premier Martial Arts Woodbridge. The school specializes in Krav Maga, along with martial arts, such as Brazilian Jiu Jitsu, for all ages.

Steve Arntt, Premier Martial Arts Woodbridge owner and an instructor, sees the benefits of Krav Maga training. “People are becoming increasingly aware of the dangers in their communities, and this has led to a rise in programs like our Krav Maga program. Until there is a cultural shift [away from violence], self-defense is a must have. With increased awareness of how dangerous our society can be, we are seeing more and more people searching out Krav Maga for self-defense, especially amongst those who have fewer advantages physically,” stated Arntt.

Ronald Villamar founded Underground Krav Maga and Fitness, a Gainesville-based school and training facility, in October. “Krav Maga involves techniques to remove an immediate threat. Those techniques can involve eye gouges, groin kicks, and other combatives that cause bodily harm. These techniques do
not follow rules and would not be appropriate in any form of competition. However, in a real-life situation, they could mean the difference between life and death,” he said. 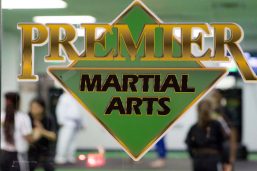 Growth in Prince William County
Each business offering Krav Maga instruction in the county has experienced significant growth in the last two years. Premier Martial Arts Woodbridge and Trident Martial Arts, which offers a combatives classes that uses some Krav Maga techniques, have each expanded, relocating to larger facilities, offering more courses, and gaining more students. Responding to demand, Gainesville attained its first facility with Underground Krav Maga and Fitness’ opening. Perhaps, though, no business has seen greater growth than the first to offer Krav Maga training at its own dedicated site, Premier Martial Arts of Manassas, which saw business double during its first year, and has relocated to larger facilities twice.

“We moved from a one-room facility to this large three-room training center,” stated Premier Martial Arts of Manassas owner and instructor, Tim Rook. And now the business seeks to expand in the county again. “We’re planning to get a second location,” said Rook. News of the location is forthcoming this summer. 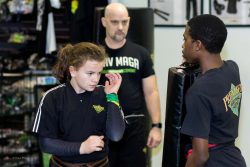 Typical Student
“There is no typical Krav Maga student,” said Villamar. Arntt noted in an e-mail interview, “[A] Krav Maga student is a normal everyday person. They want to learn how to defend themselves. At first average students wonder if they can do Krav Maga. They are worried that they are too old, too small, too shy, too overweight, too clumsy, or something else. But they make a decision to try. Once they try, they say that all of those insecurities no longer matter. They come into Premier Martial Arts Woodbridge, and they see that everyone is learning together. Everyone is supported and encouraged, and everyone learns,” Arntt wrote.

That includes children. “Krav Maga is great for kids because it focuses on removing a threat, such as hands grasped around your neck or someone grabbing your wrist, and teaches holds, which are appropriate for a child being bullied by another child on a playground, but also teaches methods to take down an attacker for such situations as an abductor trying to take a child,” said Villamar.

Rook has seen youth benefit directly from Krav Maga training. “Techniques are taught in a fun, high-energy way that make kids enjoy learning,” Rook said. “The first defense is self-esteem and confidence, enabling a verbal defense and standing up for yourself,” he said. One student found herself repeatedly
being cut off in the lunch line and then mocked. Rook talked the student through the situation, and she started to speak up whenever she was cut off. She would say, “You can get in front of me. It doesn’t bother me,” without getting angry or frustrated. Her fellow students eventually stopped cutting her off and became friendly.

Sometimes a bullying situation escalates, and Rook has seen his students face physical violence. “One student was pushed up against a wall. [My student] pushed the other kid away using Krav Maga techniques, ran, and got help,” said Rook. In another instance, an older boy was throwing punches at a younger girl. “She covered herself, closed the distance between them, and threw a knee strike at him. He [doubled over]and stopped being aggressive,” Rook described.

“We have kids with Asperger’s, autism, different sensory needs, ADHD, anxiety…any child can overcome challenges,” Rook stated. “Krav Maga is designed for anyone, regardless of size, age, [or]physicality.”

Classes
“The classes are high-energy, high-intensity, and high-impact,” described Ortiz. “They are lots of fun. And who wouldn’t have fun hitting the instructor?”

Cubbon, who has taken classes at Premier Martial Arts Woodbridge for nearly three years, agrees. “It was so much more fun than doing my normal cardio in the gym. I was able to meet great people from all different walks of life, and I started noticing how classes were positively affecting other parts of my life. It’s a great way to mix up your workout routine while actually learning something at the same time,” she said.

“Premier has a culture that is unique. For many of our students, this is the most positive place in their lives. This is the thing that gives them energy and vitality. That is 100 percent what our culture is about,” said Arntt.

“Take the plunge! Come try our classes,” invited Villamar. He continued, “You’ll love the classes, but you’ll unlock a whole new part of your personality that you never knew was there. You’ll connect with some great people and find a community of support.”

Emma Young (eyoung@princewilliamliving.com) is a freelance writer residing in Montclair. A self-described quiet introvert, she discovered an extraordinary and shocking ability to loudly scream, “No!” at ‘attackers’ in a Krav Maga class and loved it.