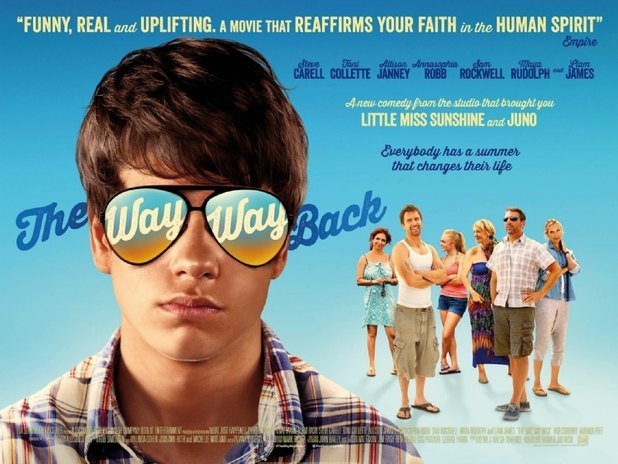 “The Way Way Back” is a place I am used to, so this movie was an easy choice. It’s a coming-of-age movie written and directed by the team of Nat Faxon and Jim Rash. These boys won a screenwriting Oscar for “The Descendants,” which they penned with Alexander Payne (Sideways). It follows that they would make this their directorial debut, as they are oddballs and that’s what this movie is about.

Duncan (Liam James from 2012) has to go with his mom Pam (Toni Collette from Little Miss Sunshine) to her boyfriend’s beach house for the summer. It’s supposed to be a time for Duncan and Trent (Steve Carell from Seeking a Friend for the End of the World) to bond since Duncan hates him. Many movies veer off into cliché-ville about here, but this movie, like Duncan, chooses it’s own path.

Trent has a daughter of his own, who is a hot and popular teenager and also wants nothing to do with Duncan. There is a bunch of great talent in this movie that fill out a nice ensemble. I have to mention Trent’s neighbor Betty (Allison Janney from Juno), who is a beautiful mess and the poster child for bad cleavage. Her darling teenage daughter, Susanna (Anna Sophia Robb from Soul Surfer), is also hot and popular, but appreciates that Duncan is different.

Although I like Duncan, and I agree with him that Trent is a jerk, Trent is right when he tells him in the opening scene that Duncan is a 3 on a scale of 1 to 10. The truth is, most 14-year-old boys are a 3. I know this, because I was a 1.85. No confidence, no charisma and no game. Add to that divorced parents, and Duncan’s life really does suck. Fortunately he gets away from those crazies and meets some new crazies in the form of Owen and Caitlin (Sam Rockwell from Moon and Maya Rudolph from Bridesmaids). Duncan eventually sees that everybody struggles with relationships. People are not perfect and are seldom a perfect match. Though, when a game of Candyland turns into a blood sport that might be a clue you are not with the right person.

I enjoyed this movie. I knew it was a trip to the beach and a coming-of-age movie, but the oddball filmmakers made sure it did not suck and was not something I have seen a hundred times. People in their forties come of age in this movie too, and you get to see Duncan do something in a waterslide that is legendary. For that I give this movie 4 stars out of 5, and I consider it a family movie standout. I don’t know why it’s PG-13 unless it was the bad cleavage. So, if you were once a 3 or less, like me, see this movie. You will come out feeling like a 7.