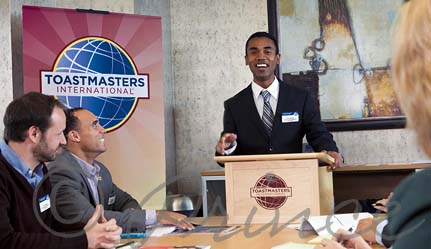 According to most studies, people’s number one fear is public speaking. Death is number two. Does that seem right? That means to the average person, if you have to go to a funeral, you’re better off in the casket than doing the eulogy. —Jerry Seinfeld

Jerry Seinfeld didn’t get it entirely right (several different studies place the fear of death no higher than number six), but he made a valid point. The prospect of speaking in public petrifies most people, but help is available through Toastmasters International, a 92-year-old nonprofit educational organization, which operates 15,400 member clubs with 332,000 members in 135 countries worldwide.

Elke Tucker, Division F Director, District 29 of Toastmasters International and a resident of Prince William County, has been helping speakers of all ages dry their sweaty palms, shed their fear and speak publicly as comfortably as if they were in their own living rooms. She coordinates division activities, sets division goals, and helps train area and club leaders. (District 29 includes 144 Toastmasters clubs and more than 2,500 members and runs west from the Capital Beltway to Leesburg, west to Front Royal and south to Fredericksburg.)

“Like many people, I joined Toastmasters to overcome shyness,” Tucker mused. “Since then, I have seen many people transformed from wall flowers into blossoming roses in as little as six months. Today, my shyness is completely gone. If I had to do it all over again, I would have joined much, much sooner… ideally during college.”

She first heard about Toastmasters 10 years ago, but didn’t join until two years later when she read an article about the Lake Ridge Toastmasters Club. “I went to the meeting as a guest and joined after the very first meeting. Today I am a member of three clubs.”

A typical Toastmasters club includes 15 – 20 people, who may be business people, students, IT specialists, retirees, home workers, teachers and all kinds of individuals from different cultural backgrounds. The minimum age is 18, but Toastmasters also runs youth leadership programs to introduce the program to those under 18.

At the same time, members can work toward Competent Leader status, which is earned by filling all the roles at a club meeting. After members earn a CL Award, they can enter the advanced leader program and earn Advanced Leader Bronze (ALB) and Advanced Leader Silver (ALS) awards, which lead toward the Distinguished Toastmasters award.

Toastmaster members also make extemporaneous speeches through an activity called “Table Topics,” which helps members develop their ability to organize their thoughts quickly and respond to an impromptu question or topic. After prepared speeches, the Toastmaster introduces the Topicsmaster, who gives a brief description of Table Topics and then calls on members at random. Those selected stand next to their chairs and speak for as long as two minutes. Speakers may be asked to:

A Toastmaster’s meeting isn’t all serious business. A number of clubs include “A Moment of Humor” in which members tell a joke or funny story lasting no more than a minute. And then, funny things happen during speeches. A Toastmaster told this story:

“One of our members attended a luncheon and sat at the table with the main speaker, also a Toastmaster. As the meal wound down, she noticed he had a piece of broccoli between his teeth. She told him about it and also said it was a good idea to check in the mirror before giving a speech so that nothing will distract the audience. The man thanked her, and she thought nothing more of it.

“The next week, she was to give the main speech on another occasion and blithely stepped to the podium without heeding her own advice. Sure enough, she gave her entire speech with something stuck between her teeth. When a friend told her about it after she had finished, she asked to speak to the group again and told them the whole story, ending by saying, ‘Like they told us in drivers’ ed, “Check your mirror before you start!” They all had a good laugh over it and learned something important for anyone who speaks in front of groups.

Looking toward the future, Elke Tucker concluded, “I am very optimistic about Toastmasters since we keep growing and are adding new clubs every year. We will add a Spanish-English club and a club for authors this Toastmaster year. Toastmasters has a bright future.”

If you are a beginning teacher facing your first class, a recent graduate starting work at a local company or a retired pilot taking a real estate class to earn your realtor’s license, you need Toastmasters. Join them and start losing that fear that Jerry Seinfeld joked about that is really no laughing matter. You owe it to yourself. And Toastmasters will be right there to ease the way.

For more information about Toastmasters Clubs in the area, go to tmd29.org/division_f.html.

Dan Verner (dverner@princewilliamliving.com) is the author of several books and was named “Best Writer in Prince William County (Virginia)” for 2014 and 2015 by readers in a “Best of Prince William” poll taken by Prince William Today newspaper. Find out more about him at danverner.com.