The Middleburg Film Festival opened this weekend, and you really have to come out to see it. Just hang a right on Pendleton at the Safeway and follow the blacktop road. The Salamander Resort will appear in the landscape and pull you right into the magic.

Founded by Shelia Johnson (Producer of “The Butler, BET Founder), this festival is like nothing Virginia has ever seen. Filmmakers 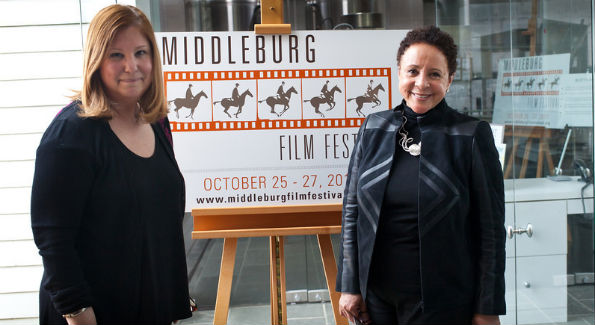 from all over the world are showing up with their films in this tiny Virginia town. In speaking with Shelia, she explained that she got the idea when her friend Robert Redford visited. A longtime Middleburg resident, Shelia helped to build a performing arts center at the Hill School. She sees this festival as just another way to support the arts and the local community.

Documentary Filmmaker Susan Koch (“Kicking It”) collaborated with Johnson on several projects and was excited to come on board as executive director of the festival. Koch says she is committed to “foster an intimate and accessible festival experience.” To that end, the festival provided several workshops with industry professionals for up close and personal discussions about the process of making movies.

I was able to sit in with award-winning film composer George Clinton (“Austin Powers,” “Bury Me at Wounded Knee”) as he gave a 90-minute class on his approach to scoring a film. I also heard from top film critics John Horn (Los Angeles Times), Ann Hornaday (The Washington Post) and Janet Maslin (The New York Times) what makes a good film, how to choose what films to review and how they approach the ever-changing role of the film critic.

There is an amazing slate of films being shown. Academy Nominated lead actor Bruce Dern presented the film “Nebraska” and was on hand for the Q & A after the screening. And though I was not able to get in on it, Lee Daniels (Director of “The Butler”) attended a screening of “The Butler” and hosted a discussion about the challenges of making the film when the studios were not interested.

The only thing missing for me was a handful of films from Virginia filmmakers. Ms. Johnson promised they would make room for some of these in the future and welcomed the opportunity to review some locally produced projects. I have to admit that I submitted my recently completed feature film “Bright Lights and Promises,” but it did not make the cut.

This festival is in good hands, as Johnson is one of the most successful businesswomen ever, and told me “this will not be a one-off. We will be back next year.” I will be back as well, looking for the best films from all over the world and maybe a few from the neighborhood.

Tom Basham is an Indie Filmmaker who resides in Nokesville