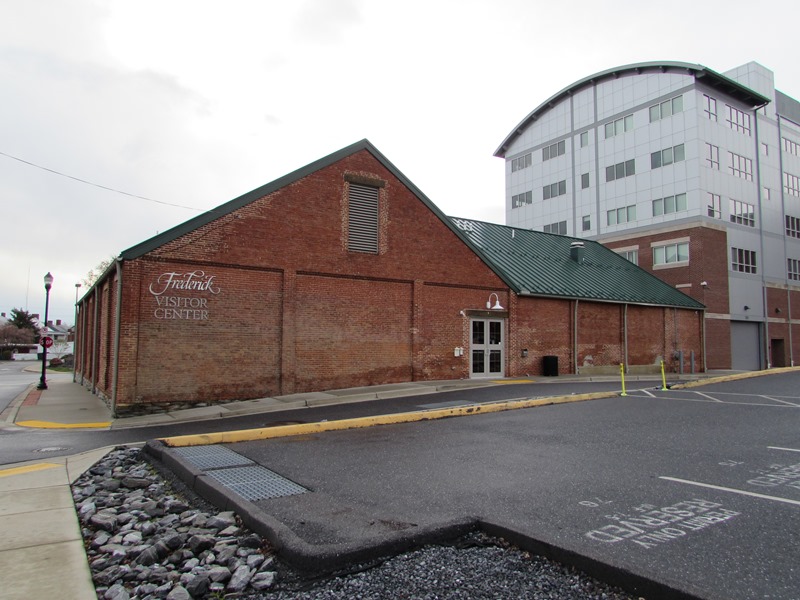 You likely have heard of Frederick, Maryland.  It is that town that you pass by while you drive along U.S. 15, or you think of it as where you catch I-70 to head west.  Have you ever thought about stopping by and seeing what is in Frederick?  You are wondering what could possibly be in Frederick.  You think of it as just some town with a historic district with old buildings.  Ladies and gentlemen, you are about to discover one of the region’s great treasures.

The one way that you can see the treasures of Frederick is to begin with the Walking Tour which begins at the Visitor Center on East Street.  The Visitor Center is housed in an old canning warehouse.  It sits in what was once a thriving industrial neighborhood.  From there, you make your way to the Delaplaine Visual Arts Education Building.  Like many arts buildings you may have visited elsewhere, this one is housed in an old mill that milled flour and distilled whiskey.  Today, it displays works from the locals of Frederick. 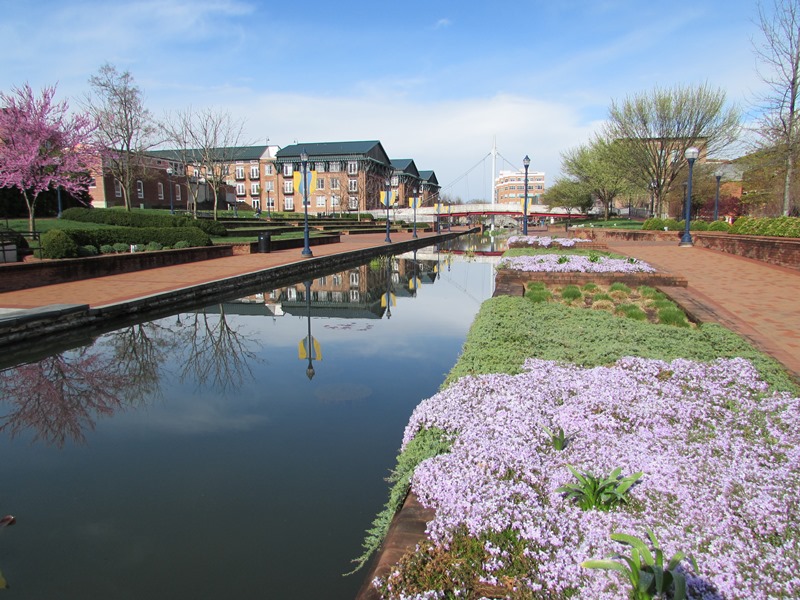 You come upon Carroll Creek Park.  No, this is not a park with trees, trails and a steam of water running through.  It does have walkways, works of art to include a mural and decorated bridges, gardens, and restaurants along the way.  Originally part of a flood control project, it has become one of the centers of attraction in the town.

You arrive at the Civil War Museum of Civil War Medicine.  Inside, you see displays and the methods of how soldiers were cared for in the war.  You then come upon the Weinberg Theater.  Originally a theater for silent movies, it was destroyed by a flood but later restored as a stage theater.  If you have some time, you can check their schedule for the next show.

You arrive at the John Hanson House, home of, of course, John Hanson.  Rebuilt on the site of the original home, you can see where the “President of the United States in Congress Assembled” lived.  A statue of John Hanson sits behind the house in front of the entrance to the Frederick County Courthouse.  A few steps later, you will see the Barbara Fritchie House, the home of, of course, Barbara Fritchie, a woman who was immortalized in The Ballad of Barbara Fritchie which begins, “’Shoot, if you must, this old gray head but spare your country’s flag’ she said.”  She is buried in Mount Olivet Cemetery. 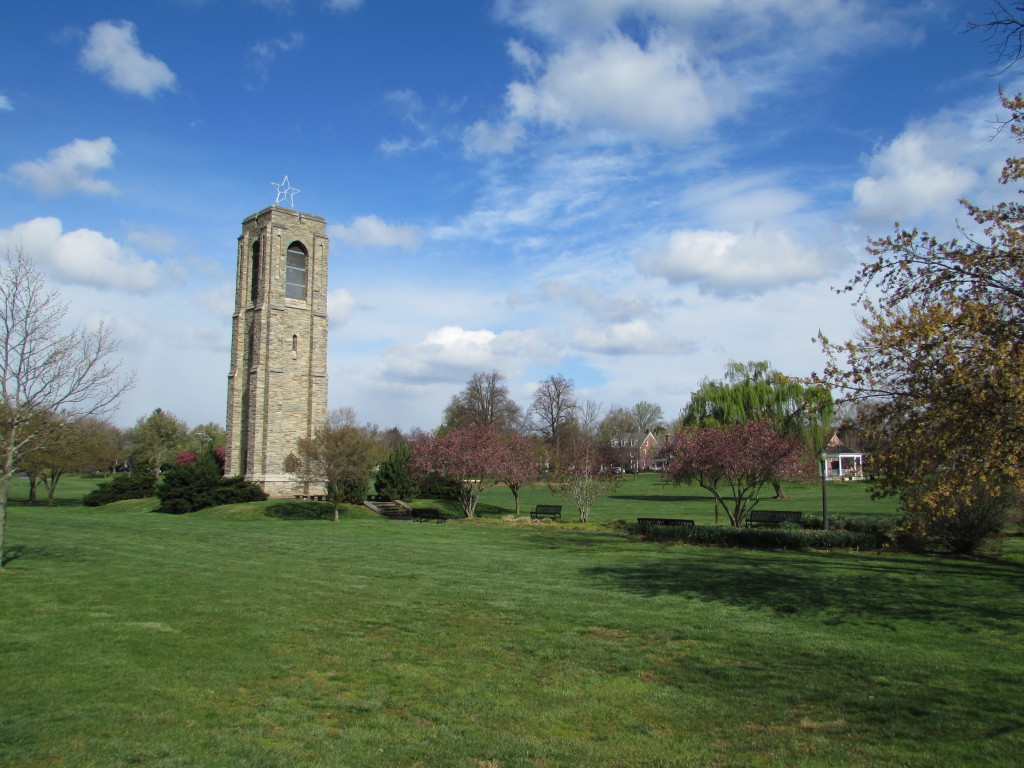 You rejoin Carroll Creek, and you walk up to Baker Park.  This lovely park is named in honor of John Dill Baker whose claim to fame was donating the land to create the park.  The park features the Baker Carillon, whose forty bells ring every fifteen minutes.  You then walk from Baker Park to the Memorial Park where war veterans are honored.  Memorials from all of America’s major wars are erected here.  Across the street is the street is the Calvary United Methodist Church that was built on land that was also donated by John Dill Baker.  The church has the nickname of ‘The Little Cathedral of Western Maryland”.  You then come to the Frederick Presbyterian Church.  What is its claim to fame?  One of its visitors was Confederate General Thomas ‘Stonewall’ Jackson, and the church served as a hospital for soldiers wounded at South Mountain and Antietam.

Across the street is the Ramsey House.  It was here where President Abraham Lincoln visited with Union General George Hartsoff.  Hartsoff was wounded in the Battle of Antietam and was being cared for in this house.  At the end of the street is the Tyler Spite House.  How did this house get a name like this?  The house was owned by John Tyler.  One of the city streets was proposed to be extended to run across his property by the local officials, and he was not in favor of it.  He built the house to block the proposal.  He built his home in ‘spite’ on what local officials wanted.  This is how the name the Tyler ‘Spite’ House came to be.  Oh, across the street is the present City Hall.  It was originally the County Courthouse, but it became City Hall after a new Courthouse was built in 1985.

You then come upon the All Saint Episcopal Church.  One of its famous parishioners is Francis Scott Key, the man famous for penning the poem that became the National Anthem of the United States.  Across the street is the site of oldest continuous fire department in the state of Maryland.  (The company has been relocated to another facility.)  They were the first to respond to put out the fires in Harper’s Ferry, West Virginia after John Brown’s raid in 1859.  Across the street is the Evangelical Reformed Church.  Barbara Fritchie regularly worshipped here, and Thomas ‘Stonewall’ Jackson visited here in September 7, 1862.  Back across the street is the Trinity Chapel.  It was the site of the city’s first German Reformed Church.  The steeple in the oldest in Frederick and holds the town clock.  You walk to the corner, and you are ‘Earthbound’.  You will not notice that you are looking at a mural until you take a closer look.  Just across the intersection is the Kemp House where Maryland officials met in 1861 to decide whether to stay with the Union or to join the Confederacy.

A short walk away is Winchester Hall named after Hiram Winchester, a Connecticut educator who erected the building to house the Frederick Female Seminary.  It now houses county offices.  Across the street is the Evangelical Lutheran Church.  It was originally built with logs before being place with a stone structure.  It also served as a Civil War hospital.  You then arrive at the Museum of Frederick County.  It was originally a private home before being turned into an orphanage and then the museum.  Continue along the street, and you are at the Trail Mansion which was constructed by Charles Trail, a Civil War Colonel.  It now houses a funeral home.

You turn the corner, and you have Saint John the Evangelist Roman Catholic Church on the left and the Visitation Academy on the right.  Both structures were erected by the Jesuits.  You walk one block to East Street and turn right.  On the right side, you see the Everedy Square, the site of a company that manufactured bottle cappers.  On the left, you see Shab Row, a place where carriages traveling the nearby National Road were serviced.  Today, the sites house stores and coffee shops.

You have made it back to the Visitor Center and have completed the Walking Tour.  Then you realize that you have only seen a small portion of what is in Frederick.  Other city sites you can visit is the Schifferstadt, an architectural museum housed in the oldest building in Frederick, the Roger Taney House, home of a former Justice of the Supreme Court, Bjorlee Museum and Barracks on the Maryland School for the Deaf campus and Rose Hill Manor, the home of Maryland’s first governor.

As you can see, there is plenty to see and do in Frederick, and there are many great places to eat.  The next time you are driving by on U.S. 15 or rolling along I-70, take a little detour into Frederick.  You will be amazed at what you will find.