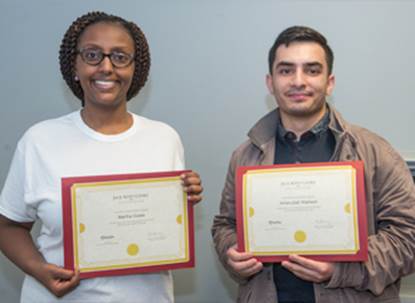 Northern Virginia Community College is pleased to announce that two of its 2017 graduates, Martha Gizaw and Amanullah Waheed have been awarded the prestigious Jack Kent Cooke (JKC) Foundation Undergraduate Transfer Scholarship. The scholarship provides up to $40,000 per year for tuition, books, living expenses and required fees for the final two to three years necessary to earn a bachelor’s degree at a four-year college or university.

Gizaw and Waheed attend NOVA’s Woodbridge Campus and were selected based on their exceptional academic achievements, grades, leadership skills, community service initiatives and perseverance in the face of adversity. The selection process is highly competitive with approximately 55 scholarships awarded each year out of thousands of applicants. This year, the Jack Kent Cooke Foundation received approximately 3,000 applications.

On April 12, the students and many attendees expressed an outburst of emotion at the surprise announcement held in NOVA’s Seefeldt building on the Woodbridge Campus. With a financial need to further their education, both Gizaw and Waheed expressed their gratitude for receiving the scholarship.

“Without NOVA, none of this would have been possible,” Waheed said. “My instructors have been such a huge part of my life. They continuously motivated and encouraged me to stay at NOVA, and I really took their words into consideration.”

Although he was being accepted as a freshman at Boston University and Babson College, Waheed chose to attend NOVA, where he currently serves as the president of the NOVA-Woodbridge Chapter Phi Theta Kappa (PTK) Honor Society and as an active member of several campus organizations. With aspirations of becoming a venture capitalist to help future entrepreneurs develop small start-up companies, the Osbourn Park High School graduate is considering transferring to Georgetown University, Boston University, University of Virginia and Pennsylvania State University.

“I never expected to be surprised like this,” said Gizaw. “Before coming to NOVA, I had to explain to my parents that even a student with a learning disability could attend a college or university, and I did. After going through all of these amazing experiences at NOVA, I have discovered that I came here to represent who I am today.”

Gizaw enrolled at NOVA through the Pathway to the Baccalaureate Program. She also received a two-year NOVA Honors Scholarship that covered the expense of tuition and books for her entire NOVA degree program. As a full-time student, she has presented several scientific research projects for the Virginia Collegiate Honors Council and has served as a research assistant. Gizaw plans to transfer to a four-year university to become a computational neuroscientist, and is considering George Mason University, Georgetown University, Johns Hopkins University and the College of William and Mary. She is also one of two NOVA nominees for the 2017 Goldwater Scholarship, awarded to students interested in science, mathematics, engineering and computer (STEM) disciplines.

Both Gizaw and Waheed are two of three students recommended by NOVA President Dr. Scott Ralls for Georgetown University’s Community College Preferred Consideration Program. In addition, they were selected as members of the Phi Theta Kappa (PTK) 2017 Top Ten All-Virginia Academic Team. For the 12th consecutive year, a total of 18 NOVA students have been recipients of the Jack Kent Cooke (JKC) Foundation Undergraduate Transfer Scholarship. The Cooke Foundation Undergraduate Transfer Scholarship is the largest private scholarship in the nation for students transferring from two-year community colleges to four-year institutions.