Growing up in Dallas, TX I can’t say that I had much access to water, as in lakes, rivers, or oceans.  The best my family could do was to take me down to the local YMCA and let me splash around to beat the summer heat.

It must have been around the age of five, when they got serious about me actually learning how to swim.  Like most children my age, I was excited to be at the swimming pool and like most parents; mine wanted me to be safe in the water.  So they ordered up one set of swim lessons for an energetic five year old that had no fear.  That was until the first day of class.  It was an ordinary day and all the youngsters were splashing about, but no one realized that something was going terribly wrong.  Before this class, I had only played in the shallow end and had never put my face in water.  This was a first for me and let me say, it did not go over well.

Life Lessons I Learned That First Day of Swim Class:

First, I did not like the feeling of water on my face. Second, I could not breathe under water

I can still recall the burn and pain of the chlorinated water going through my nose and sinuses as I deeply inhaled while trying to blow bubbles in the water.  I believe that was the first day the trauma set in and even at the tender age of five, I had successfully convinced myself that I could not do this.  Needless to say, those two weeks of swim lessons were fruitless, as were the next eight years of them that my parents signed me up for.

It also turned out that I didn’t like being pushed off the 10-foot diving board by my instructor. I believe that push, plus cutting my foot on the bottom of pool, turned my trauma into a mild phobia.

Well apparently, my parents were about tired of wasting their money and their time taking me to swim lessons for eight years; and I still wasn’t any closer to being an Olympic swimmer.  So around the age of thirteen, I didn’t have to go to lessons any more. I was happy; I had started to resent that YMCA and its Water Safety Instructors.  The years went by and I managed to avoid all waterways and swimming pools, and never had a need to swim again. 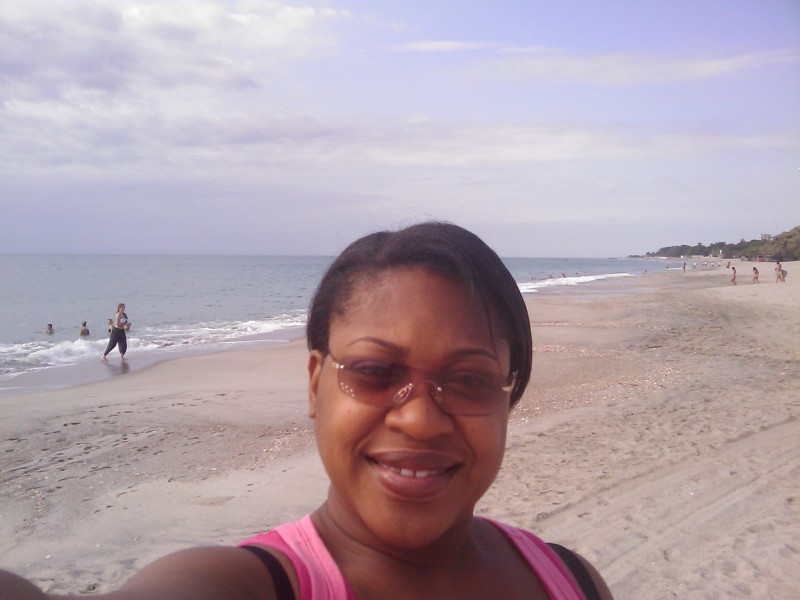 The Worst Blindside is A Wet One

Until about eight year later, I took a job at the American Red Cross in the Health and Safety Department.  I was blindsided when I discovered that a new job requirement was that all employees be able to swim.  Out of the entire department, I was the only one who could not.  With no other choice, I was forced to face my fears and sign up for swim lessons yet again.  This time, I remembered life lessons one and two right off the bat and was prepared.  The two weeks of lessons went fairly smooth and I managed to graduate level one after successfully flailing my arms and legs enough to get to the other side of the pool.  I received a false sense of security; I mean a swimming certificate and went on my way.

Shortly afterwards I booked a vacation to Puerto Vallarta with my husband.  I’m not sure what got into me, but I allowed him to talk me into getting in a two-person kayak with him in the Gulf of Mexico.  Even a blind man could see this wasn’t going to end well.  After being knocked around the kayak by the waves for several minutes and still neither of us being able to jump in, my husband gets the bright idea for me to get in first and then him second.  Did I mention, neither of us had ever been in a kayak before and didn’t  know the first thing about kayaks, including how to get in one?  In one fatal swoop, I was in the kayak—wait for it—and then a huge wave comes crashing in and overturns the kayak and me; the newly level-one swim graduate.

So that left me upside down and trapped under a kayak in the ocean. Or, as I like to call it, traumatic experience number three. Thus came full-blown phobia amidst my panic attack.   Then, out of nowhere, a sense of calm came over me, which probably saved my life.   I figured out how to pull myself out of the underwater coffin, and palmed the length of the kayak, until my head finally popped up out of the water.

After that fiasco, I was done with water and all water-related sports and recreation.  The next fifteen years went by with no shortage of exotic and tropical vacations, because I loved to travel despite missing out on the warm waters of several islands in the Dutch West Indies, Hawaii and the coast of Panama.

No Little Boats in Jamaica
I had come up with so many excuses when people asked me why I didn’t swim.  I’d say, “You know black girls don’t like to get their hair wet,” or “ People who can’t swim, shouldn’t be in the water,” were a few of my quick one-liners.

One-liners would not be able to hide my phobia in Jamaica, however. I wrote a letter about a friend to “The Big 4-0,” a TVLand show about people celebrating their 40th birthdays in a big way. We were selected, and ended up getting to go to Runaway Bay, Jamaica for her big 4-0.  I should have expected the producers would inevitably want us all in the Caribbean Sea at some point.  But never in my wildest dreams, did I expect another kayak to show up in my life.

Raw emotions overtook me and the waterworks started to flow—I was genuinely terrified and panic stricken.  Somewhere, likely out of instinct, I developed this little rhythmic chant, “I’m not getting on that little boat, I’m not getting on that little boat.”  Not surprisingly, that scene ended up being one of the highlight moments of the show.  Through the magic of reality TV, the producers flipped it to appear to be a funny moment, but behind the scenes, a truly traumatic episode had occurred.

Not So Dingy in Thailand

Fast forward a few years, and the  trip of a lifetime fell into my lap.  My friend Stephanie won airline tickets for a trip to Thailand and invited me to go with her.  We made arrangements to stay at the luxurious upscale boutique, Paresa Resort in Phuket and allowed the resort to schedule our entire itinerary.  The resort’s tag line is “Heaven on Earth” and without a doubt; it lived up to it.

The gourmet meals were to die for, the ambiance, stunning views and vistas where unbelievable, the service was magnificent and our daily sightseeing itinerary was matched perfectly to what we wanted to do on vacation.  Until it was time to go snorkeling.  This was something my friend really wanted to do, and I didn’t want to rain on her parade.  In my head, I thought snorkeling meant we were going to the beach for the day and I could post up on a lounge chair, while she went snorkeling at her leisure.

To my dismay, this was not the case. We were loaded onto a boat (a big boat).  For about an hour, we cruised the open waters of the Andaman Sea and I was really starting to enjoy myself.  Then we stopped and everyone was supposed to jump off the back of the boat into the water to either scuba dive or snorkel.  That was definitely not my idea of a fun afternoon.

Panic quickly set in along with peer pressure.  I didn’t want to be the only one left on the boat, plus I had come all the way to Thailand—so I had to at least try, right?  As Julie Roberts said in Pretty Woman, “Big mistake! Big. Huge.”  I just could not pull myself to jump into open water. Eventually one of the deckhands decides to bring the dingy over and sail me to shore, so I could snorkel from there.

That plan almost worked.  Whilst taking a step from the boat to the dingy, the dingy moved.  So now I’m stretched out, half of me in the dingy, the other half still hanging on to the boat like a rubber band and all the while screaming and crying with terror written all over my face.  At the time I was too afraid to be embarrassed, but in hindsight that was probably one of the most embarrassing things that has ever happened to me.

The second most embarrassing thing followed up quickly.  Once I finally got in the dingy and made it to dry land, the tremors stopped and I composed some of my dignity back…I was still set on trying to snorkel on this trip.  After falling and flailing in the water enough times, I was finally assigned a babysitter.  A little man weighing all of 90 pounds had to come out in the water to hold me afloat while I snorkeled.

Although very, very embarrassing I must admit it was extremely fun and inspiring.  So much so, that with an all-new determination, upon my return home I called the Chinn Aquatics and Fitness Center and signed up for their Adult (Fear of Water) Swim Lessons.   The patience and understanding the instructor displayed with me was incredible.  I explained my swimming background and in just a few short weeks, Keleigh had restored my confidence.  These were definitely not the swim lessons of my youth.

The Journey Continues in Mexico

Through a few tears, I developed a healthy respect for water and I know my limitations.  With family and friends cheering me on, I completed the beginner lessons and will soon be signing up for the Adult Advanced level.  I feel like I can even become a lifeguard at some point (mind over matter right?).

After 15 years, I finally made my way back to Mexico.  Long story short, there was another friend (Carla), a free trip with her company Origami Owl and another invitation to ride shotgun.  It was an excellent weekend getaway and as you can see, I finally got comfortable in Cabo. 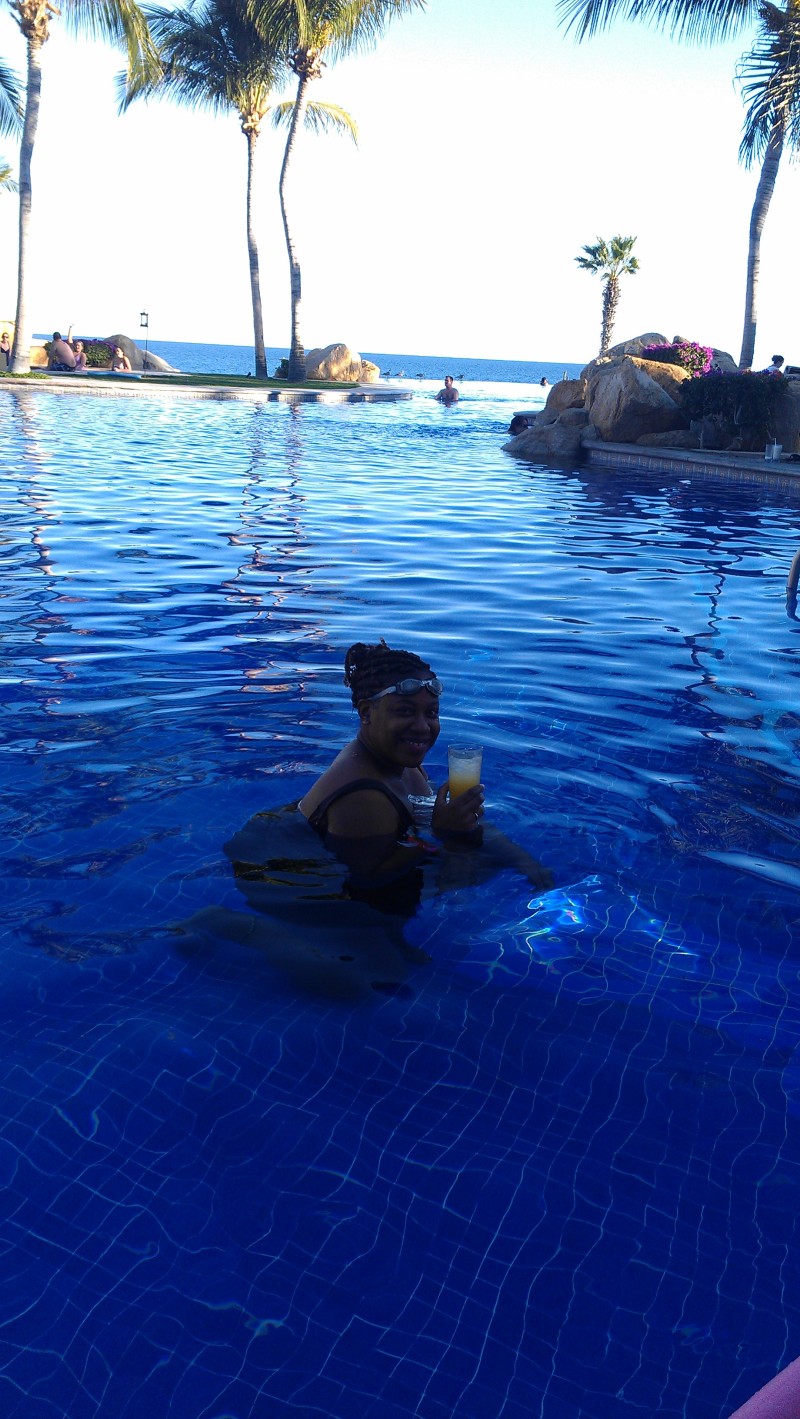