Creating a Revolution in Local Fitness

Parkour, an athletic discipline that developed out of military obstacle course training, has been around since the World War I era. It was developed by a French naval oﬃcer, Georges Hébert, who promoted athletic skill and ﬁtness based on the natural lives of indigenous tribes he met and observed in Africa. Hébert was an early proponent of “parcours,” or obstacle course. Decades later, with the help of people like David Belle and Sébastien Foucan (famously chased by James Bond in “Casino Royale”), parkour gained its greatest popularity in the 1990s in Europe. 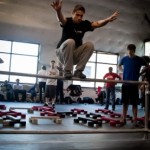 The modern philosophy of parkour is “human reclamation,” or body movement the way it was naturally intended. Regular training can increase stamina, agility, and balance among other beneﬁts.

Over the last decade, the U.S. has caught the fever of this ﬁtness modality. While parkour gyms are not widespread, Prince William is fortunate to have its very own, Urban Evolution, located at 8442 Kao Circle in Manassas. Owners, Salil and Malikah Maniktahla, opened their ﬁrst Urban Evolution location in Alexandria in May 2010. Following a warm reception, the couple did some research and opened the Manassas gym last March.

PWL: Where did the idea to open something so unique as a parkour gym originate?

Maniktahla: I hated going to the gym. I spent $400 on an annual membership that I didn’t use. I started doing parkour in 2007. It got to the point where I was going [out to do parkour]seven days each week. Parkour changed my world in so many ways.

PWL: Why a location in Prince William?

Maniktahla: There are three real reasons we focused on Manassas. First, we did a demographic survey of our Alexandria club’s inactive members and found many of them came from Manassas and the surrounding area. Second, we found that the Manassas area is one of growth and the real estate prices were aﬀordable.

This enabled us to get in early on the area’s growth. It also meant we would not cannibalize our Alexandria location. And, ﬁnally, Manassas is designated as a fringe urban center of D.C., again, designating it as great growth potential.

PWL: What is your professional background, and does it relate to your business?

Maniktahla: I have a degree in biology, was pre-med but went into IT business intelligence and have worked for companies like Wells Fargo and Google. In 2009 I was laid oﬀ…[at another company]but it was a kind of a wake-up call.

PWL: Did you have previous business experience?

Maniktahla: I’ve never started my own business; my wife’s family has always  owned businesses. We started out with no ﬁnancing, no bank would loan to us for this business. We cashed in a 401K and our parents kicked in a bit of ﬁnancing. We knew our choices are to do it or go out of business. We deﬁnitely keep it lean, keep it hungry.

PWL: What is your purpose for Urban Evolution?

Maniktahla: We take the pain out of going to a traditional gym. And we are  succeeding and growing faster than the typical model.  At many gyms you pay a membership fee and then ﬁnd individual classes might have an additional fee to participate.  At Urban Evolution, there is a ﬂat fee, inclusive membership. We also oﬀer methods that are tough to ﬁnd, and we prove that you don’t need a lot of equipment to get ﬁt.

PWL: What challenges have you had to overcome?

Maniktahla: Every day is a challenge. We opened our ﬁrst location in Alexandria with nothing. In a way, I think owning a business follows the format of parkour: business is going to throw obstacles out there, you need to ﬁnd a way over them. But our biggest challenge is having people understand why we exist.

PWL: What are some of the successes you have encountered?

PWL: What has having Urban Evolution enabled you to do as a business owner?

Maniktahla: Owning this business has expanded my abilities 50-fold, both physically and business-wise. It is hands- on personal development. I’ve learned marketing, video editing, diving into social media—the list of lessons learned can go on.

PWL: What have you found to be the most eﬀective way to get your gyms in front of people; what have been the best marketing methods?

Maniktahla: We focus on unique but low-cost methods to demonstrate our brand. We want to create a buzz so we do things like right before Halloween, we put on a spontaneous Ninja Flash Mob. It created a buzz and people wanted to  know where we came from and who we were. We do things like demos and events to micro audiences like the Scouts, or hold a session of zombie tag.

PWL: What is your future vision for Urban Evolution?

Maniktahla: I’d like to revolutionize ﬁtness in this country. Grow to make parkour training a common option to people.

PWL:: What is your best advice to others wanting to start a business?

A nonproﬁt development director for over 10 years, Jennifer Rader now works as a freelance writer and consultant. She lives with her son and husband in Manassas and can be reached at JRader@princewilliamliving.com.