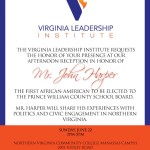 Manassas, Va. – On Sunday, June 22, 2014, Virginia Leadership Institute (VLI) will honor and recognize the achievements of Mr. John Harper, the first African American elected to serve on the Prince William County School Board. This event will bring together supporters of minority political and community leadership initiatives to network and share information on increasing diversity in elected and appointed offices, as well as community leadership.

Mr. Harper will share his experiences with politics and civic engagement, followed by a networking social. The reception will be held from 3:00 p.m. to 5:00 p.m. at the Northern Virginia Community College Manassas Campus (6901 Sudley Road, Manassas, VA – Howsman Hall Room 216). To RSVP, email pwcevents@virginialead.org or call 703-969-9647 for more information.

About Virginia Leadership Institute : Virginia Leadership Institute (VLI) aims to increase the number of black elected and appointed officials in the Commonwealth of Virginia through political training, mentoring, and networking opportunities. Since its inception in 2006, VLI staff and volunteers have trained and consulted with over 200 future candidates and campaign professionals in skills ranging from fundraising, communications, field operations, and community leadership. To date, 19 have filed to run for office, six have been elected, and nine have been appointed to boards and commissions. To learn more about VLI, please visit www.virginialead.org