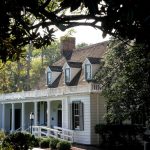 The Prince William County Historic Preservation Division and the Ruth E. Lloyd Information Center, or RELIC, are teaming up to bring virtual tours of the county’s historic properties.

The tours, on July 20 at 11:00 a. m. and July 25 at 7:00 p. m. at the Bull Run Regional Library at 8051 Ashton Avenue in Manassas, will offer people the chance to get a quick glimpse, through images and narration, into what the properties have to offer, said Paige Gibbons-Backus, Ben Lomond Historic Site and Lucasville School historic site manager. “A lot of it is going to be images, both historic and modern, images of these buildings so that you can see what they look like on the inside. You’ll also see some images of places that may not be regularly open to the public.”

Some of the properties that are usually not open to the public and might be of special interest include the Barnes House, the Bennett School, and the Cockpit Point Civil War Park.

Eppa Barnes and Amanda Lambert Barnes, who were married in 1875, built the 19th-century Barnes House, where they raised 12 children. The Barnes House is now located at the Montclair Community Library.

The Bennet School was built in 1908 when the Virginia General granted money for agricultural high schools in each of the state’s 10 districts. Manassas is home to the first of those schools built under the grant.

Cockpit Point served as part of the Confederate Potomac Blockade between October 1861 and March 1862. Experts say Cockpit Point – where cannons were placed to keep Union ships from reaching Washington D.C. with supplies – contains some of the best-preserved earthworks and forts from the Civil War in Northern Virginia.

Backus-Gibbons said she thinks the tours might get people interested in visiting some of the historic sites. People who visit in person will be able touch artifacts, try on period clothing and gear and hear audio depicting life in the periods represented at the some of the historic sites. “When you come and you see just a little bit of what we have to offer, it’s so new and it’s so exciting that we think you’re going to want to come and see it for yourself. You can come and get an idea of the type of history that we interpret here in the county, and some of the things that you can visit when you’re out-and-about looking for things to do.”

RELIC is a special collection devoted to genealogy and local history, with a focus on Virginia and Prince William County. Trained staff help people find information needed to trace family history. RELIC can also help research people, places and events associated with local history. The American Revolution and the Civil War as they relate to Virginia are of special interest to many who visit the center.

Visit RELIC or the preservation division’s website for more information.