A farmers market buzzes with opportunity. Hoping that their labors will be fruitful, vendors set out their produce and wares. Customers arrive faithfully, strolling the rows in anticipation of returning home with fresh, homegrown fruits and vegetables, homemade jellies and other foods.

For years, as the last auburn leaves fell from the trees, the joy of this hunt would end as the markets closed for winter. Luckily, this bittersweet farewell is no longer necessary in greater Prince William. The farmers markets of Old Town Manassas and Dale City now remain open year-round. While fresh vegetables don’t make an appearance, plenty of non-seasonal items are available, including meats, jams, honey, spices, nuts, baked goods, coffee, kettle corn and even pizza.

Gets Shoppers in Holiday Spirit The second winter season of the Old Town Manassas Farmers Market began Nov. 9. The market, which

is located in the Harris Pavilion during the regular season and in Lot B near the Old Town Manassas Train Depot during winter, is open Saturdays from 7 a.m. to 2 p.m., before returning in April to its peak season hours of 7:30 a.m. to 1 p.m.
Saturdays through Thursdays.

“There are still opportunities in winter to get healthier and fresher food and to support the local economy,” Historic Manassas, Inc., Events Coordinator Annie Blewett said.

The market has what you need to start a brisk winter morning, such as hot coffee or tea and baked goods. You can also get the makings for a plentiful Sunday brunch: fresh meats, eggs and jams.

Additionally, there are plenty of items to get you in the holiday spirit, such as cinnamon nuts, kettle corn and other stocking stuffers. You’ll also find handmade pine wreaths and pumpkin and apple pies made with farm-fresh fruit. Vendors such as Miriam Moya sell homemade knit sweaters and other clothing, letting you give the gift of warmth.

The Dale City winter market, in its third year, starts Dec. 15 and runs through the end of March. The open-air farmers market, one of 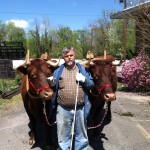 Jeff Adams is the vendor manager of the Dale City winter farmers market, where he sells pasture-raised meat from his Walnut Hill Farm at Elm Springs, LLC, in Fredericksburg. Photo courtesy Ginny Adams

the largest in the region according to Prince William County Parks and Recreation, is open Sundays from 10 a.m. to 1 p.m. at the VDOT commuter lot on the corner of Dale Boulevard and Gemini Way, behind Center Plaza Shopping Center. It is a producer-only market, where sellers grow or make all their products, with more than 50 vendors in peak season.

The Dale City market includes many of the same types of offerings sold at the Manassas Market, but with its larger size, has additional specialty items, including soaps, lotions, chocolates, pickles, seafood and wood-fired pizza.

“Many times there are items you cannot get at the store,” said Betty Finney, the market’s coordinator, adding that the market also offers “a chance to interact personally with the person who makes or grows the product.”

Virginia Rote, a retired nurse who has lived in Prince William since 1971, echoed that sentiment. She said she enjoys shopping at the Dale City market year-round because “there is a nice community feeling and a sense of gathering and an opportunity to speak with your neighbors.”

Rote said she also likes the variety of goods available, and that they are sold at reasonable and fair prices.

“You know the food is local and fresh, not sitting in a warehouse after being trucked around,” Rote said. 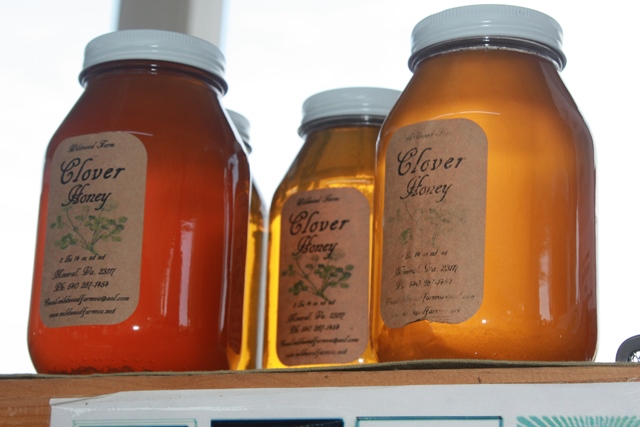 Local honey is one of the treats available at winter farmers markets in Prince WIlliam. Photo courtesy Taylor Lenz

“The quality one finds in the summer season is there all year long,” said the Dale City winter market’s vendor manager Jeff Adams, who owns Walnut Hill Farm at Elm Springs, LLC, in Fredericksburg. “From a vendor point of view, winter is a time to get to know each other, because summer is too busy. You get to know their products and their stories,” he added.

Adams and Marty Nohe, Coles District supervisor on the Prince William Board of County Supervisors, were instrumental in getting the Dale City winter market off the ground. Adams said that he mentioned the possibility of a winter market to Nohe and his wife Kristina Nohe, a regular customer. The supervisor then brought the idea before the board, which approved the plan when Adams offered to manage the winter market.

Both the Manassas and Dale City markets offer food made to order. Adams prepares specific cuts of meats and poultry to order, as do Manassas market vendors Patrick and Bettina Lane, who own Wildwood Farm, LLC, in Mineral, Va.

At the Dale City market, Leesburg-based Four Seasons Seafood also offers food made to order. James (Everett) and Gloria Headley, own the business and the James E. Headley Oyster Company in Callao, Va. Their menu includes fresh Northern Neck oyster and crab delicacies, including gluten-free crab cakes. For a taste adventure, try their crab chili, made with or without beans and beef.

Some market vendors also sell baked goods made to order. The Hummingbird Bakery, owned by Sara Piddington of Manassas, takes special orders at the Manassas farmers market. Piddington allows customers to choose from 13 flavors of bread and select two ingredients from a 22-item list of fruits, nuts and even Oreo cookies.

Not to be outdone, Haymarket-based Cakes by Shelby, run by Shelby Biancaniello, a vendor at both markets, has a pie bar featuring mini shells with fillings such as cream and banana. The vendor also has a cupcake bar, where cupcakes can be customized with different cake flavors and a variety of icings and toppings.

As Will Rogers said, “The farmer has to be an optimist or he wouldn’t still be a farmer.” While winter is traditionally a time for sleeping late, making fires and staying indoors, vendors from Dale City and Manassas said they are optimistic that homemade goods and a chance to know neighbors will bring shoppers outdoors to the markets.

For a list of winter vendors at both markets, see this article in “Destinations” on pwliving.com.

Michelle Hurrell is a freelance writer and a recovery support specialist for PRS, Inc., a nonprofit organization with three locations in Northern Virginia. Hurrell teaches classes at the PRS Mount Vernon Recovery Academy, helping those with intellectual disabilities and individuals with mental illness or substance abuse challenges reclaim and achieve personal and professional success. She can be reached at [email protected]