Hans and Shirley Ponse had always wanted to try volksmarching. With one thing or another, they hadn’t
been able to, although they had lived in Germany where the noncompetitive walking had originated. When they finally got the chance after returning to the U.S., a Maryland rainstorm almost made their first walk their last.

“When we got out of the car, we stepped in water over our ankles. We were in a corn field in mud. Then it got hotter than hades. I kind of decided that was the last of that,” Shirley recalled. The couple toughed it out and completed the six-mile walk. “Then we had a bratwurst. That helped,” she said.

Now, more than 20,000 kilometers (Shirley) and more than 15,000 kilometers (Hans) later, the 83-year-old hikers are long-time members of the Wood & Dale Wanderers, a Prince William volksmarching and fitness club. Established approximately 35 years ago, the club currently has fewer than 20 active members, said Celia Miner, who has trekked more than 25,000 kilometers herself and is the group’s treasurer and trail master as well as secretary for the American Volkssport Association, with which the Wood & Dale Wanderers is affiliated. The club is also one of 10 Virginia clubs affiliated with the Virginia Volkssport Association.

Volksmarching is a concept brought back from Europe by GIs and their families who lived there between the 1960s and 1980s, explained Tim Miner, Celia’s husband and Wood & Dale Wanderers president. In Europe, sometimes thousands of people will attend a volksmarch sponsored by a local club or associated
with a festival, he said. They walk 5, 10 or 20 kilometers on a marked trail around beautiful scenery or a cultural site. “Before there was walking for causes to earn money, it [volksmarching]was a sport that people did regularly. There is no cause. It’s just an opportunity to gather together for a long walk,” he said.

Because most folks don’t know what volksmarching is and fewer folks have lived in Europe, AVA doesn’t just want to be known simply for volksmarching, said Miner. “Yes, we are volksmarching for those that know what that is, but we’re trying to become a national walking organization promoting fitness, fellowship and fun.” Although the Wood & Dale Wanderers are proponents of walking for fitness, they promote biking,
swimming and snowshoeing too.

Like European walkers, the Wood & Dale Wanderers try to explore beautiful or interesting areas. The club has established permanent trails (designated vetted walks) in seven areas, including Prince William Forest Park, Leesylvania State Park, Manassas National Battlefield Park, historic Manassas and even Potomac Mills Mall, so walkers can go inside when the weather is bad. “We are one of the few clubs around the nation that try to make this a better year-round activity by using the mall,” said Tim.

Typically, people have three to four hours to complete the 5- to 10-kilometer trails. “We have many people who stop for lunch at a restaurant in the middle of a trail or see a museum or something like that. That’s all fine. It’s not competitive. You go at your own pace and enjoy the sights,” said Tim.

The club holds bimonthly walking events to enjoy cultural sites around Prince William, which have led to some discoveries. “We had no idea that Jennie Dean Park existed in Manassas or Mayfield fort until we went out and looked. Of course, there’s Neabsco boardwalk. There are many neat things in Prince William County to go out and see,” said Celia.

In addition, the club schedules special programs periodically both inside and outside Virginia. One such program with the VVA focuses on the 275+ Loveworks commissioned by the Virginia Tourism Corporation to promote its slogan “Virginia is for lovers.” The club plans on visiting Love signs throughout the state. “It’s going to take us awhile,” said Tim. Another special program being done nationally and for which the club is spearheading efforts are “walks that visit memorials or monuments to veterans of our country.” 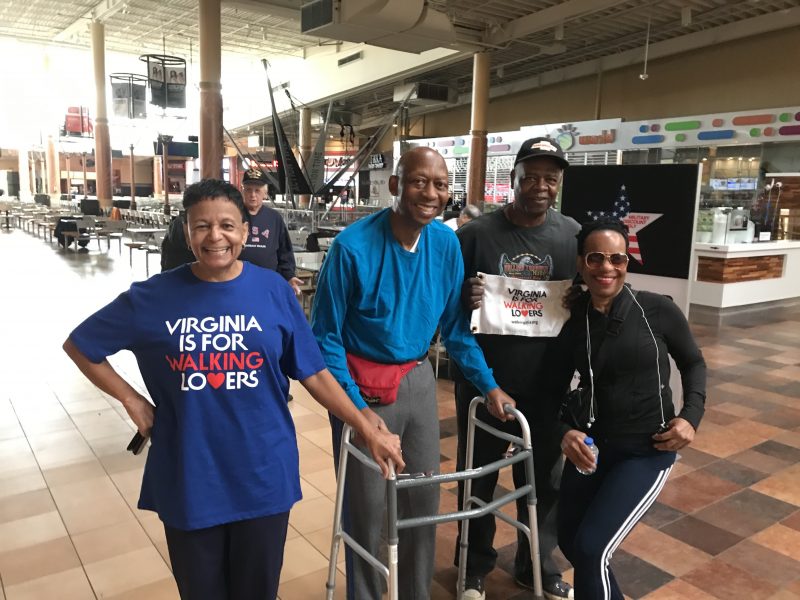 Before the pandemic, the walking activity at the Potomac Mills Mall
was a daily hub that showed “Virginia Is For Walking Lovers!”

Although the Ponses participate in club walks, they said they typically walk on their own daily using the Montclair trail or Potomac Mills Mall when they can’t walk outside. For those who are tracking their kilometers or volksmarching, there are starting boxes for each walk where you sign in, pay a small fee and get a stamp for your log book that proves you did the walk; however, the log isn’t required for participation. “Anybody can do those walks. You don’t have to belong to the club. You don’t have to be a volksmarcher,” said Hans.

Like many established clubs, the Wood & Dale Wanderers find it hard to recruit younger members. “We are kind of the young puppies in the group and we are senior citizens,” said Celia. “It’s a little harder to get younger people interested. There are so many other activities for them especially those with children. If they have children with soccer or scouts, they have those activities.”

COVID-19 has been another challenge, causing the club to suspend their meetup group temporarily and to take additional precautions to ensure the safety of those participating. Still the club keeps going. Recent efforts successfully lobbied Virginia to adopt the motto “Virginia Is for Walking Lovers” and the county’s board of supervisors to name the first week in April as walking week.

As members of the Greater Prince William Trails Coalition, they advocate for trails in Prince William and interconnected multi-use trails with nearby jurisdictions, “They help people get out and walking and enjoying where the trails already exist. They cheerlead for a trail,” said Charlie Grymes, the coalition’s
president.

“We are the ones that want to put the boots or the tennis shoes on the ground and get people to use these trails. We want to show that these great trails will make Prince William a really great place to live,” said Tim.

April 1 – 7 is National Walking Week. For a list of events, go to walkvirginia.org/woodndale or search for events at my.ava.org/find-an-event.php.

Carla Christiano is a native of Prince William, admitted history geek and a technical writer for SAIC, who is more likely to walk for ice cream than bratwurst.