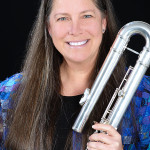 WOODBRIDGE, VA – The Woodbridge Flute Choir (WFC), a 25-member ensemble that performs on flutes of all sizes from piccolo to contrabass flute, will feature low flute expert and the chairperson of the National Flute Association’s Low Flute Committee, Dr. Chris Potter, at its next performance on Sunday, March 24, 2013 at 3:00 p.m. in the Gregory Theater of the Hylton Performing Arts Center in Manassas, Virginia.

Dr. Chris Potter will present a Master Class on Saturday, March 23, 2013 from 1:00 – 3:00 p.m. at Burke Presbyterian Church in Burke, Virginia.  Admission is free with RSVP to jdgilbert99@gmail.com.
Also featured on the concert will be the WFC’s 5th annual Concerto Scholarship Competition winner, 9th grader Katja Kochvar

from Export, Pennsylvania, where she attends Franklin Regional Senior High School and studies with Dan Parasky.  Katja will receive a scholarship award of $500 to be used toward her future music studies, and will perform the “Scherzino” by Joachim Anderson with the Woodbridge Flute Choir.

Dr. Potter will perform “Stone Suite” by Sonny Burnette, a piece that requires the soloist to perform on piccolo, C flute, alto flute and bass flute, and “March of a Marionette” by Charles Gounod, arranged by Peter Senchuk for bass flute soloist and flute choir.  Dr. Potter will also conduct the WFC’s performance of “Voices from the Deep” by Alexandra Molnar-Suhajda featuring only alto, bass and contrabass flutes.

The Woodbridge Flute Choir, directed by Debbie Gilbert and assisted by Lisa Sheldone, was founded in 1996 as an outlet and learning experience for volunteer adult flutists.  The WFC has performed in a wide variety of concert series and events in the Washington, DC, metro area.  It has also performed in renowned venues including the Kennedy Center and the White House, at the 2011 National Flute Association Convention in Charlotte, North Carolina, and has been again been invited to perform at the 2013 Convention in New Orleans.  The group has created three commercial CDs and will soon begin work on its fourth, and has commissioned a number of world premieres from various composers.  The Woodbridge Flute Choir has 25 members who play flute, piccolo, alto flute, bass flute and contrabass flute.

More information about the Woodbridge Flute Choir, its 2012-2013 season, and its upcoming commercial cd recording project may be found at www.woodbridgeflutechoir.org.