More than two decades ago, Rebecca Jeffries brought together a small flute ensemble in her Woodbridge
home. Today, the Woodbridge Flute Choir has grown to 25 members who play flute, piccolo, alto flute, bass flute and contrabass flute, making for one of the most unique and impressive ensembles in the area. Since its founding in 1996, the group has grown from a creative outlet and learning experience for volunteer adult flutists to a serious performance ensemble that has recorded four albums to date — Butterfly, Woodbridge Suite, Passages and A Silver Christmas.

Throughout the years, the choir’s process and productions have developed and changed, primarily because they enjoy mixing unexpected elements, like narration and musical sound effects, into their musical repertoire.

“We recently did a piece called ‘Nonsense’ by Mel Orriss that included limericks by Edward Lear, which were narrated by Andy Green,” said Debbie Gilbert, artistic director for the Woodbridge Flute Choir.

“We also recently performed Nicole Chamberlain’s piece ‘Railroaded,’ which has the flute choir use extended techniques on their flutes to sound like a train,” Gilbert noted. “We love Catherine McMichael’s piece ‘Legend of the Sleeping Bear,’ too, which also includes narration.”

Gilbert researches and selects new music for the choir at live performances and online: “I attend the National Flute Association convention every year where I often hear new music that I’d like to perform with the choir. I also visit various websites that specialize in flute choir and listen to recordings of pieces,” she said.

Flutists wanting to sharpen up their jazz skills won’t want to miss the opportunity to learn with internationally known jazz flutist Ali Ryerson at her October masterclass.

There, she will teach how to better play jazz when it is written in a flute solo, ensemble or flute choir music. She will demonstrate the right way to articulate the markings in the music. The cost is $25 to attend or free with a current student ID.

The masterclass will be followed by a free concert with performances by Ali Ryerson and her band along with the Woodbridge and Frederick Flute Choirs. It will be held Saturday, Oct. 19 at Greenwich Presbyterian Church in Nokesville.

The choir is giving local high school students opportunities to learn and grow as musicians through its Concerto Scholarship Competition.

“The Concerto Scholarship Competition is for high school flutists. They submit a recording of a solo that has been arranged with flute choir accompaniment. A committee selects finalists based on their recordings and the finalists play before a panel of three judges,” said Gilbert. “The winner then gets to perform the piece with the Woodbridge Flute Choir at our March concert and receives a $500 scholarship.”

Bringing Flute Music to the Nation

The Woodbridge Flute Choir not only brings opportunities to enjoy their music locally. The group has traveled across the country to perform some of their favorite pieces.

“We have been selected to perform in at the National Flute Association Convention three times: 2011 Charlotte; 2013 New Orleans; and 2015 Washington, D.C.,” Gilbert said. “We were also selected to perform at the first Low Flutes Festival held in April 2018 in Reston,” she said.

All events for the upcoming concert season are on the calendar, except the choir’s May 2020 concert, which is still to be announced. All events, except for the October masterclass, are free to the public. The season includes:

Learn more about the Woodbridge Flute Choir at woodbridgeflutechoir.org.

Amy Taylor ([email protected]) is a freelance writer and editor. She earned her BLS in English from the University of Mary Washington in Fredericksburg, Virginia. 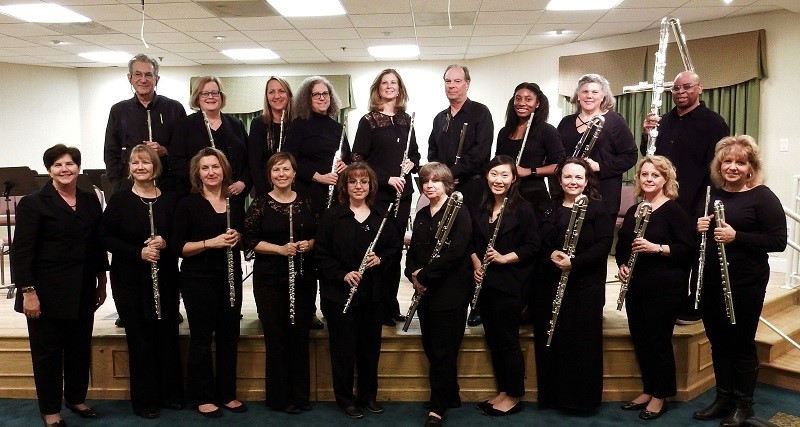 Today, the Woodbridge Flute Choir has grown to 25 members who play flute, piccolo, alto flute, bass flute and contrabass flute, making for one of
the most unique and impressive ensembles in the area