Flutists, jazz musicians, and music enthusiasts are invited to a masterclass and concert with world renowned jazz flutist Ali Ryerson. The class features and is sponsored by the Woodbridge Flute Choir and the Frederick Flute Choir.  The program will take place on Saturday, Oct. 19 at the Greenwich Presbyterian Church in Nokesville.

The masterclass will be followed by a free concert at 3:00 p.m., with performances by Ali Ryerson and her band and the Woodbridge and Frederick Flute Choirs.  Lunch will be available for purchase in advance; click here for details.

The masterclass is a great way for flutists and jazz musicians of all ages to learn new techniques while watching a master teacher!

This program kicks off an exciting season for the Woodbridge Flute Choir, with performances in December, March and May to follow.  The full calendar is available here. 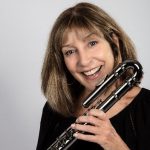 Ali Ryerson has emerged as one of the most exciting and versatile flutists on the scene today. She has performed with as Dr. Billy Taylor, Kenny Barron, Stephane Grappelli, Frank Wess, Red Rodney, Laurindo Almeida, Art Farmer, Maxine Sullivan, Roy Haynes, Julius Baker, and (as principal flutist with the Monterey Bay Symphony) with Luciano Pavarotti.

Ali has released over a dozen jazz albums, the first four on European labels. She was then signed by legendary record producer Bob Thiele who produced two albums on his Red Baron label. Ali then signed with Concord Jazz for an additional three recordings. Jazziz put her Concord debut album on its Critic’s Picks for 1995.

Ali’s most recent album Con Brio! has received rave reviews from the jazz world’s most prominent publications: Downbeat and Jazztimes.

For more on Ali Ryerson, visit her website at AliRyerson.com.