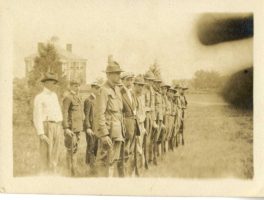 Local troops training at the Bennett School. From the Manassas Museum Collection

In 1917 and 1918, the Manassas Railway Depot was the scene of many tearful goodbyes as young men from the area shipped off to World War I battlefields a world away. Their experiences—and the community they left behind—are the subject of a new Manassas Museum exhibit, The Forgotten World War, opening on Oct. 6 at the Manassas Museum.

The exhibit, a joint effort between the Manassas Museum and the Prince William County Historic Preservation Division, commemorates the 100th anniversary of the “War to End All Wars” and remembers the 29 young men from the area who never returned. The Forgotten World War is one of several exhibits where the museum and the county have worked together to bring history to life.

“We knew that we wanted to take part in the statewide commemorations for World War I and II by doing a special exhibit.  We also wanted to partner with Prince William County on this endeavor, since Manassas was still part of the county during World War I,” explains Manassas Museum Curator Mary Helen Dellinger. “The County, as always, was very enthusiastic about doing another joint exhibit.  We selected a home front theme since so many other places are doing military-related exhibitions.  We wanted to do something different, and I think this exhibit fits the bill.”

Jessica Alicea, a Prince William County Historic Preservation Division Site Manager who collaborated on the exhibit, agrees. “The importance of the joint exhibit is two-fold; it’s the commemoration of the 100th anniversary of World War I, but more importantly, we will explore how the war affected our county, and specifically feature those who served in the war from Prince William County.”

In Prince William County and Manassas, residents felt the war’s impact not only in the absence of the area’s young men, but in voluntary efforts to conserve wheat, sugar and other staples, establish gardens, raise animals for food, support the Red Cross, and buy Liberty Bonds. By November of 1918, the worldwide Influenza epidemic hit the area hard, and even Manassas’s young doctor succumbed to the disease when treating his many patients. 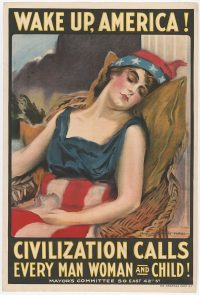 A propaganda poster from the Collection of the Library of Congress

There was also an influx of soldiers training at two new bases. Marine Barracks Quantico was established in May 1917 with a garrison of just fewer than 100 Marines. By the time the war was over, thousands of men had passed through those gates before being sent to France. Camp A.A. Humphreys in Fairfax (known today as Fort Belvoir) transformed from a small training ground to a large base that taught more than 55,000 soldiers military engineering, chemical and trench warfare and field fortification techniques. These bases are still fixtures in the area where tens of thousands of soldiers live and train.

On Oct. 6 and 7, the Virginia World War I and World War II Profiles of Honor Mobile Tour will make a stop in Manassas during First Friday and Fall Jubilee. Modeled on the highly successful Civil War 150 HistoryMobile interactive tour, Profiles of Honor brings to life the state’s integral role in both wars, highlighting stories of Virginians who served in both conflicts.

During the mobile tour stop in Manassas, visitors are invited to bring their own WWI and WWII-related photographs and documents to be scanned for inclusion in the Profiles of Honor Scanning Program. The Virginia WWI and WWII Commemoration Commission and the Library of Virginia have partnered to create a statewide online collection of original World War I and World War II manuscripts that still remain in private hands. The project is looking for materials that reflect the social, political, military, business, and religious life in Virginia during the World Wars. The project already has some materials available on their online site, virginiawwiandwwii.org/scanning, and will continue adding materials as the scanning program visits locations across Virginia.

During the Nov. 4, 2017, Greater Manassas Veterans Day Parade, the Bull Run Rotary Club plans to honor veterans by displaying 200 flags on the museum lawn, with an additional 26 flags representing area World War I casualties. Along Prince William Street, the 29 fallen soldiers from the area will be remembered on banners hanging on City light poles.