By Jorge de Villasante for Write by the Rails

Who knew that in August 2011 a few writers gathering for coffee would lead to a dynamic group with hundreds of publications to their name? That’s the story of Write by the Rails (WbtR), the Prince William Chapter of the Virginia Writers Club. Now celebrating its tenth anniversary, WbtR continues to meet its mission of raising the profile of the local literary community while nurturing other writers and serving Prince William County, Manassas, Manassas Park and beyond.

Cindy Brookshire, Founder and past President of WbtR, is thrilled the club has survived for so long. It’s not typical, according to Brookshire, who says most writers’ groups don’t make it to 5 years. There were many directions and models the group could have followed, Brookshire says. “The strength of Write by the Rails has been in not controlling its evolution, but rather letting it grow and evolve naturally according to members’ motivation,” says Brookshire.

Founding member and current President Katherine Gotthardt agrees with Brookshire that letting the club grow naturally has allowed it to evolve. Gotthardt says because of this, the club has an inclusive culture and encourages diversity. Writers of multiple genres at every level make up membership, from those just starting out to field experts. “We have writers who self-publish, writers who publish traditionally, and writers who opt for hybrid models. We also have those who just write for pleasure,” she says. “It’s a wonderfully eclectic group.”

Jan Rayl, Vice President, is extremely proud of helping authors get published. “I am one of our many encouragers,” she says. “Together we assist others in reaching their dream by supporting writers along the journey toward publication.”

Over 100 book publications have come from WbtR authors, according to Rayl. But even those not seeking to write books have a home in the group. “For those like me that write in professional journals, Write by the Rails has anthologies. Submissions cover multiple genres. It sure was exciting to see my name in print in a book,” she says.

John Dutton, Board Member-at-Large and founder of Spilled Ink open mic is also an encourager. He says, “Just write, and you’ll be right.” 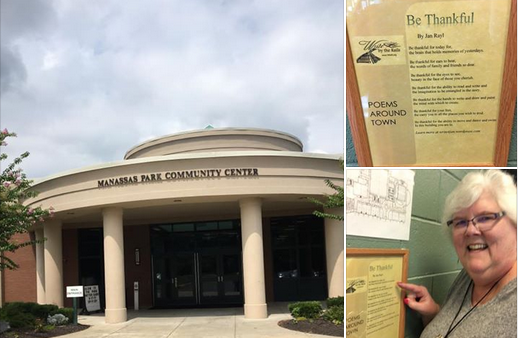 Besides offering club members learning activities, workshops and networking, motivated members have supported major undertakings including establishing an arts center, participation in George Mason University’s Fall for the Book, establishing the local Poet Laureate program, promoting Spilled Ink open mics, launching the Poems Around Town poetry installation and more. Brookshire says all the while, group members have cultivated the words in their stories, articles and poems carefully and thoughtfully, like tending a beautiful flower garden. Leaders help as they develop their own skills and create programs that empower writers to bloom.

Board Member-at-Large Nancy Wyatt states, “In Prince William, Write by the Rails has become a major contributor to literature, the arts, and to public awareness of the importance, power and beauty of writing. It showcases new and seasoned writers and features both work and performance artists in festivals, presentation panels, and local businesses. It’s earned a reputation for enriching the culture and lives of writers.”

Currently, WbtR holds monthly meetings – Writers’ Enrichment events – during which writers learn together and support each other. Because of COVID-19, most events have been online. But the club is planning a live workshop to be held November 13 this year.

For anyone interested in becoming a writer and getting involved in WbtR events, Gotthardt stresses that the group is community oriented and welcoming. The WbtR website has a plethora of information on literary events, club membership and resources for writers. For details, visit wbtr.org.